An Unusual Way To Spend The Summer 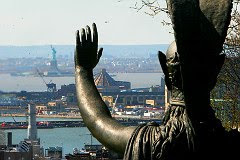 Nice to see Minerva get some TLC.

"I know that when I'm back in France I'll tell everybody that I know that there's this great cemetery and this great statue," said Ines Reulet, 21 from France, one of six volunteers in New York for the next two weeks with the Preservation Volunteers of America program.

She and the other volunteers spent the morning applying fresh coats of wax to Minerva and will be tidying up some granite tombstones for the rest of the afternoon.

Richard Moylan, president of Green-Wood Cemetery, says the statue was placed there by the local businessman Charles Higgins in 1920 to commemorate the Battle of Brooklyn. "She is saluting the Statue of Liberty. And that's especially important with our French volunteers, since the statue was a gift from France and France helped us with the Revolutionary War," Moylan says. "And Liberty is actually, we think, looking right at us, so Minerva is saluting her."

Gotta say that doing restoration work in a cemetery does sound cool. And who knew there were two Goddesses in NYC (Liberty and Minerva) facing each other?

Wisdom and magic salutes Freedom and Welcome. Nice thought. Gorgeous statue -- wish there were reproductions of this one!