Margaret Atwood, A Nation Turns Its Lonely Eyes To You. 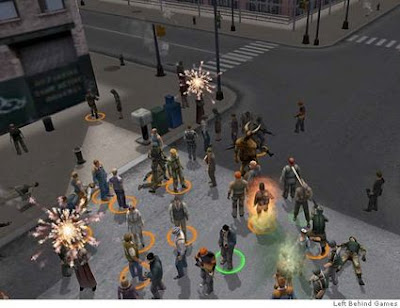 Here's a lovely (and by lovely, I mean fucking awful) follow-up to yesterday's story that the Pentagon is engaged in a "long and deep collusion with a fundamentalist, religious missionary organization." Troutfishing reports in a diary at Daily Kos that:

The "Left Behind: Eternal Forces" video game, is set in a "post apocalyptic" New York that looks almost exactly like New York City after the September 11, 2001 terrorist attacks and lets players simulate commanding a paramilitary Christian army that seeks to convert Jews, mainline Christians, Muslims, atheists, Buddhists, and everyone else in New York City to fundamentalist Christianity. All who resist will be killed.

Some who criticized the game have said that it conditions players for religious war.

Now, with the blessing and endorsement of the Pentagon, a Christian ministry with apocalyptic fundamentalist beliefs that is planning a series of tours it calls a 'military crusade' to entertain US troops in Afghanistan and Iraq will also be distributing the "Left Behind: Eternal Forces" 'Convert or Die' religious warfare video game....

Osama Bin Laden himself could hardly hardly have hatched a better plot to incite widespread war between Christianity and Islam, and the Pentagon's endorsement of "Operation Straight Up" and that ministry's plan to bring the bigoted, hateful religious ideology inherent to Tim Lahaye and Jerry Jenkins' "Left Behind" book series to American troops in the front lines casts into question the basic competence, not to mention the sanity, of every Pentagon official involved in the decision to endorse such mind boggling idiocy.

Someone tell me one reason to believe that we are NOT living in a theocracy. I'll wait right over here.
Posted by Hecate at 11:33 AM

JFK relieved Gen. Walker of his duties for distributing John Birch Society material to his troops and telling them how to vote.

Now the Pentagon would send him on a speaking tour to boost troop morale, I guess.
.

they have tipped the balance.