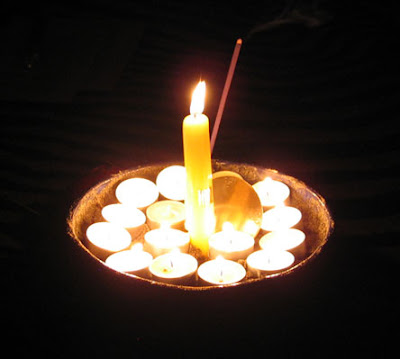 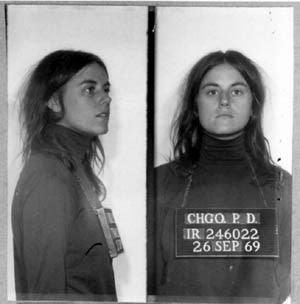 They call it terror
if you are few and have no B-52s
if you are not a head of state
with an army and police
if you have neither napalm
nor tanks nor electronic battlefields
terror is if you are dispossessed
and have only your own two hands
each other
and your rage
It is not terror
if you are New York’s Finest
and you shoot a ten-year old Black child in the back
because you think Black people
all look like
they’ve just committed a robbery
It is not terror if you are ITT
and buy the men
who line Chilean doctors up in their hospital
corridors
and shoot them for supporting the late
democratic government of their country
It is not terror but heroism
if you were captured by the Vietnamese
for dropping fragmentation bombs
on their schools and hospitals
Only those who have nothing
can be terrorists
.......

Posted by Hecate at 2:35 PM No comments:

Jung's Hotel By Nancy A. Henry 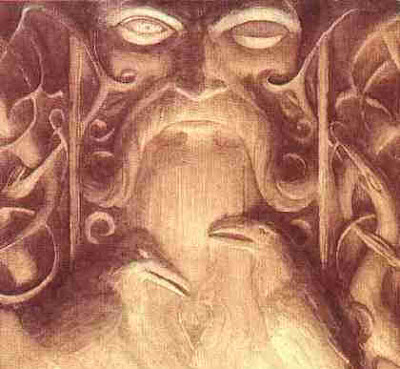 Here in the nightstand drawer
no Gideon's Bible, but
The Golden Bough.

In the bathroom
with its tiled echoes
and metaphoric plumbing
our reflections come back to us
mask-like, above a sink
that is a vortex of all
the mythic rivers of the dreamworld.
Posted by Hecate at 2:49 PM 1 comment: 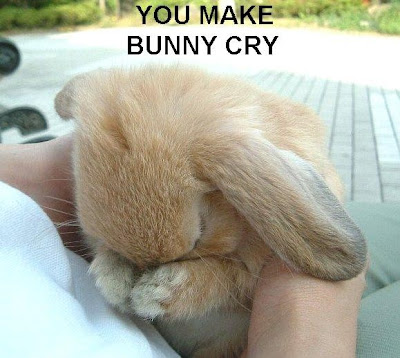 Kali on a keyring, Democrats. Stop this shit. It is just not fucking helpful.
Posted by Hecate at 2:17 PM No comments: 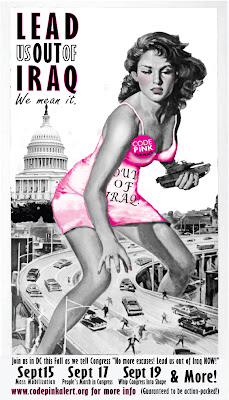 Read this.
Posted by Hecate at 1:06 PM No comments:

Labels: Peace, We Could

The Last Few Marigolds Peeking Up Through The Fallen Leaves 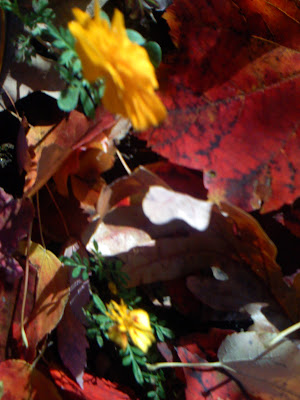 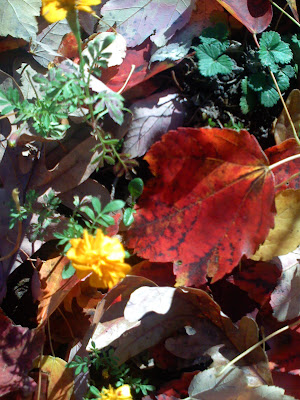 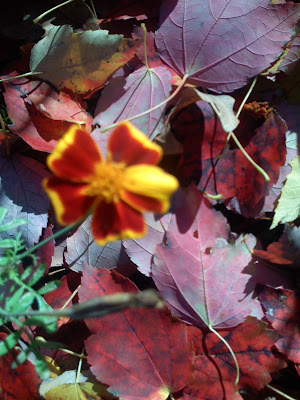 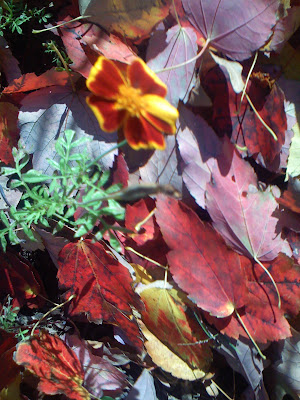 A Lovely Day To Rake Leaves

The oak leaves don't turn pretty colors, but this year the maples and the beeches are especially colorful. One last autumn rose. And some rose hips. 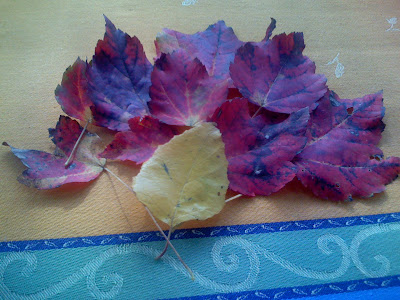 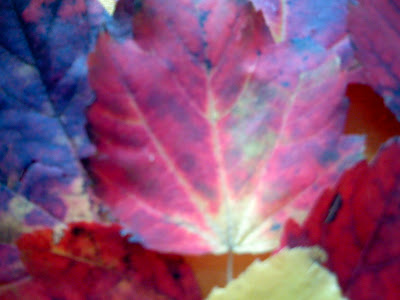 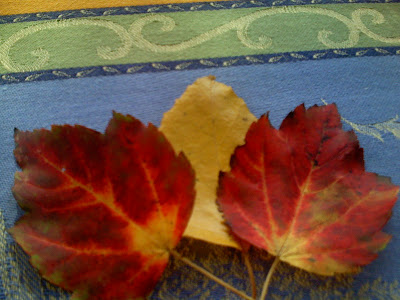 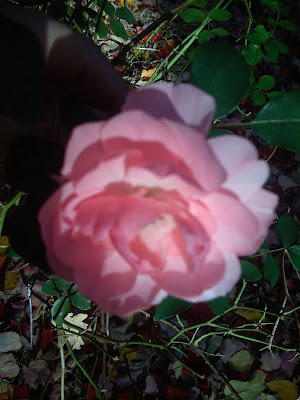 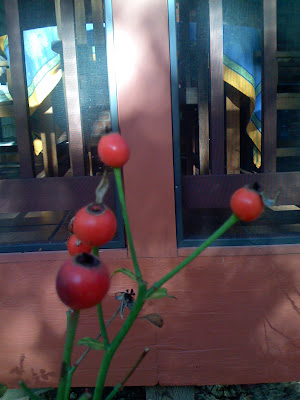 Go If You Must; Stay If You Will. Hail And Farewell! 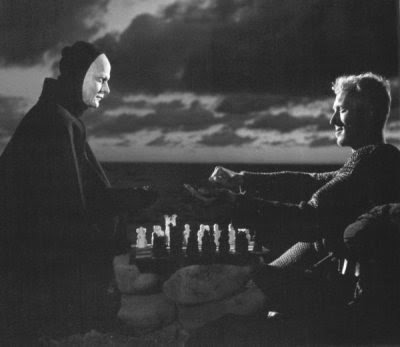 Denise Lee has an amazing post in Matrifocus on how we die. I find it oddly appropriate for this time of year when the trees are "dying," when the light is "dying" and when we naturally turn inward.

Deathworkers like Joan Halifax confirm what I've observed at the side of those who are dying: We can perceive the changes as the dying person says goodbye to the elements — to earth, water, fire and, lastly, air.

The element of earth is the first whose power leaves us. As earth departs, the dying person's body loses its strength and becomes thin and heavy. She may feel she is falling or sinking. Her skin begins to pale. She grows drowsy and finds it harder and harder to open her eyes. Earth is losing its ability to provide a base for consciousness, and dissolves into the element of water, bringing an image of shimmering, of a mirage.

As water leaves her, the skin, lips and eyes feel dry. She thirsts, as the waters of the body recede, and emotions move beyond her grasp. Bodily sensations dwindle, alternating between heat and cold, and she senses she is being swept away, as though by very fast water. Water is no longer able to support consciousness, and fire is taking over, bringing a vision of haze and smoke.

As the fire element burns out, she perceives the world as hot, while her skin and breath grow colder. In this phase, those close and familiar to her become unreachable. Perception is dissipating, and sight and sound become confused. The dying person has visions of sparks and fireflies as fire dissolves into air.

Finally, air loses its power, and she has more and more trouble breathing. The inbreaths become short and labored, while the outbreaths become longer. She is totally still and unaware of the outside world. Her last feeling of contact with the physical environment is slipping away; the ten winds move into her heart, inhalation and exhalation cease, and she is no longer mindful of this world.

At this point, all the elements have dissolved into the ether — the dying person is at center, and anger, illusion and ignorance cease.

How do you want to die?

More from Denise on death here.
Posted by Hecate at 4:28 PM 1 comment:

A Chant For The Long Dark Nights

Posted by Hecate at 3:59 PM No comments:

Is It Just Me, Or Is It Getting Dark In Here? 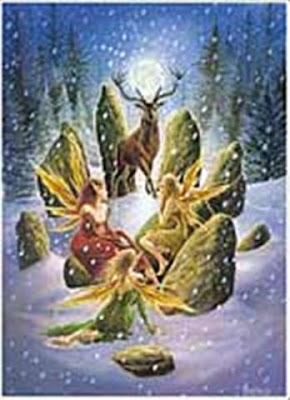 It gets dark earlier and earlier every evening. We're headed, mad dash now, towards the dark. In just five weeks, we'll reach the day of the longest dark. And, how will you spend it? What would you do, if you knew that you had unlimited time in the dark to do it? I've been feeling, ever since Samhein, a much more pronounced thinning of the veil than is normal. I expect it to begin to solidify by Yule. What would you like to do, what do you need to do, before the veil again becomes opaque?

We're headed for the Long Night, when my circle tells stories, sings songs, stays up late, and gets up early to make enough noise to wake the Sun. I treasure that night, spent in the bosom of my circle, spent surrounded by women who help me through the silent dark and into the noisy light. Someday, I am counting on them to make enough noise to wake the ferryman for me, to see me over the River Styx, to watch with me through the longest dark.

Who do you count upon for that? What does the dark hold for you now?
Posted by Hecate at 9:46 PM 5 comments: 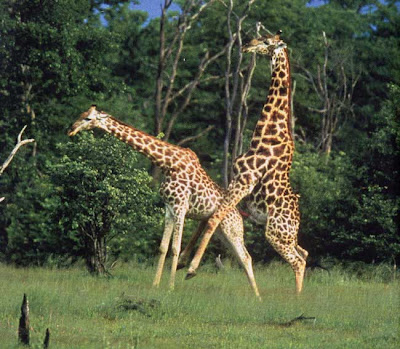 I live straight down from the zoo
and I think about sex, easing in
pulling out, the soft swinging
penises of snow leopards

in the dark, the nubbins of apes
the reproductive rites of giraffes,
the passions of pachyderms,
emus seeking grace, peacocks

waits wondering. Under the sun
and the moon, do they think
about me, lying down hill,
living so close to the zoo?
Posted by Hecate at 8:47 PM 1 comment: 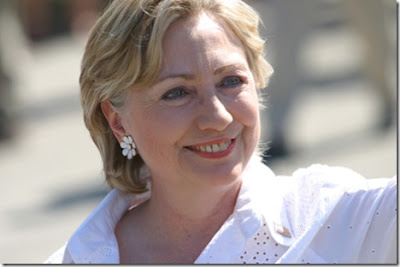 Andi Ziesler, editorial director of the magazine Bitch: Feminist Response to Pop Culture, has a great piece in the WaPo about the use of the word "bitch" to describe Hillary Clinton:

Bitch is a word we use culturally to describe any woman who is strong, angry, uncompromising and, often, uninterested in pleasing men. We use the term for a woman on the street who doesn't respond to men's catcalls or smile when they say, "Cheer up, baby, it can't be that bad." We use it for the woman who has a better job than a man and doesn't apologize for it. We use it for the woman who doesn't back down from a confrontation.

So let's not be disingenuous. Is it a bad word? Of course it is. As a culture, we've done everything possible to make sure of that, starting with a constantly perpetuated mindset that deems powerful women to be scary, angry and, of course, unfeminine -- and sees uncompromising speech by women as anathema to a tidy, well-run world.
...

I'm guessing that Hillary Clinton . . . has a somewhat similar stance on the word. After all, people who don't like Clinton have been throwing the slur at her since at least 1991. So everybody else in the room laughed knowingly when a woman at a campaign event in South Carolina last Monday asked McCain, "How do we beat the bitch?"

In fact, the most surprising thing about the whole dust-up (available on YouTube for the world to see) is that something like it didn't happen sooner. Sure, it was disrespectful of McCain to laugh off the insult. (Rather than admonishing the questioner, he called it an "excellent question," then added, "I respect Senator Clinton.") And sure, the woman who asked the question was transparently courting sound-bite fame. (Congratulations, faceless woman! Stay classy!) But for Clinton, this episode has to be pretty much a case of another day, another insult.

These days, the people hurling the term at Clinton are her direct opponents: Republicans, social conservatives, assorted Schlafly-ites and Coulter-ites, and that sludgy, amorphous pool of across-the-board woman-haters.

Their hatred for Clinton has nothing to do with whether she fits the Merriam-Webster Dictionary definition: "a malicious, spiteful, or domineering woman -- sometimes used as a generalized term of abuse." It certainly has nothing to do with her stance on particular issues. When these people call Clinton (or House Speaker Nancy Pelosi, or Sen. Dianne Feinstein or former vice presidential candidate Geraldine Ferraro) a bitch, or even the cutesier "rhymes-with-witch," it's an expression of pure sexism -- a hope that they can shut up not only one woman but every woman who dares to be assertive. Simply put: If you don't like Clinton's stance on, say, health care or Iraq, there are plenty of ways to say so without invoking her gender.

Plenty of people are lukewarm on Clinton, for a variety of reasons: her support for the anti-gay Defense of Marriage Act, her ham-fisted attempts to put forth a clear position on Iraq, the fear that she would be just as beholden to corporate interests as her predecessor. Then there are the women who chafe at the idea that they're expected to vote their sex rather than their specific politics. But very few of these people seem to worry that Clinton isn't warm enough, or that she's too dowdy or mannish or whatever can't-win descriptor is lobbed her way daily.

I'll just add that one needn't call names to denigrate Clinton, or any woman, for being a woman. If I read one more time, on one more liberal blog, that "there's just something about her personality," or "it's her speaking voice," or "she's way too ambitious," or "I don't like dynasties," or "she didn't apologize sincerely enough" I'm going to take a hostage.
Posted by Hecate at 3:24 AM 6 comments: