Thoughts On Life And Death 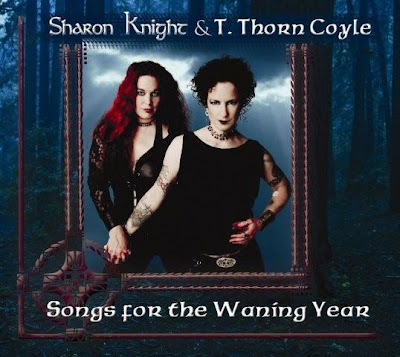 My wonderful madcap friend R. loaned me her copy of the new CD, Songs of the Waning Year, by Sharon Knight and Thorn Coyle. I am v much enjoying it. While it seems odd to be listening to these songs mere days before Beltane, they remind me that death and life are two sides of the same fish. And I want to, just once, touch the v magical drum that someone plays in these songs.

I met Derrick Jensen tonight and he autographed one of his books for me with a saying that I think he usually uses: "Choose, life or death, choose." I get his point, but I'm a witch. (Even Jensen does a riff on how odd it is to say that dualism is bad and non-dualism is good.) I don't choose; I celebrate both, not because I'm "evil," but because I know that both are part of the cycle. And, yet, of course, I can choose between a culture of corporatism and a culture of sustainability. There's a difference between premature death by poison or, more broadly, patriarchy (but I repeat myself), and death from an old age serene, and bright, and lovely as a Lapland night.

Speaking of cycles, Jensen had interesting stuff to say about the difference between cultures w cyclical myths and those w linear myths. I'll type up my notes later, but I want to ask him how we move "back" (or forward, or around the wheel) towards a culture based upon cyclical myths. Goddess knows, Pagans have a role to play in that process.

So, Knight and Coyle have a lovely song entitled, inexplicably, "For Tara," that's about the Greek Goddess Hecate. One of my problems with xian services is all the time they spend going, "Wow, god, you're amazing. Jesus, you are our savior, Father, we worship thee, Thou art great, etc." I just don't get the point. If he's god, I'm guessing that he knows. If he needs the affirmation, WTF is wrong with him? And, since it's all about me, I just don't get what I'm supposed to get out of that part of the ritual. But I find oddly moving their chant: "Hecate, keeper of the crossroads; Hecate, holder of the flame; Hecate wisdom of the darkness, guide our way." Well, I'd like it, wouldn't I?

The Time Of The Gentleman Is Expired 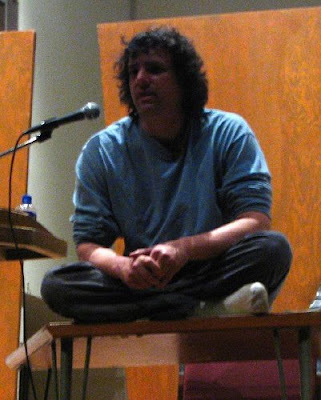 Looks as if I AM going to get a chance to interview Derrick Jensen. I want to focus, mostly, on his views on population control, spirituality that recognizes divinity as imminanet, etc. I need your help! What should I ask him????
Posted by Hecate at 11:22 PM 3 comments: 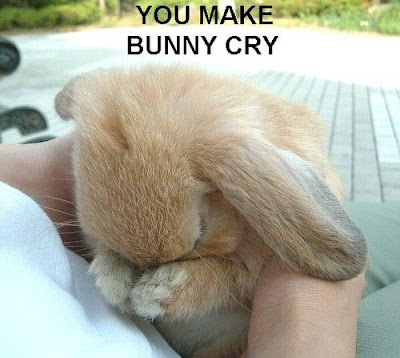 One can only hope that the author strangles on quotation marks. Ceres, I am sick of articles such as this one.
Posted by Hecate at 10:51 PM No comments: 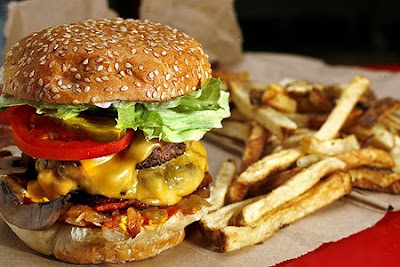 Michelle has been eating at Five Guys.

A Poem For April 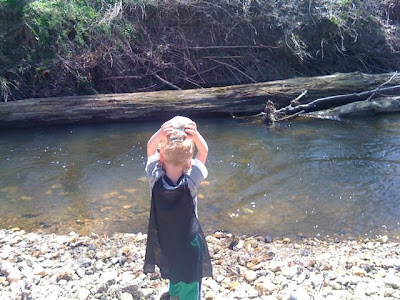 Out of the mud two strangers came
And caught me splitting wood in the yard,
And one of them put me off my aim
By hailing cheerily "Hit them hard!"
I knew pretty well why he had dropped behind
And let the other go on a way.
I knew pretty well what he had in mind:
He wanted to take my job for pay.

Good blocks of oak it was I split,
As large around as the chopping block;
And every piece I squarely hit
Fell splinterless as a cloven rock.
The blows that a life of self-control
Spares to strike for the common good,
That day, giving a loose my soul,
I spent on the unimportant wood.

The sun was warm but the wind was chill.
You know how it is with an April day
When the sun is out and the wind is still,
You're one month on in the middle of May.
But if you so much as dare to speak,
A cloud comes over the sunlit arch,
A wind comes off a frozen peak,
And you're two months back in the middle of March.

A bluebird comes tenderly up to alight
And turns to the wind to unruffle a plume,
His song so pitched as not to excite
A single flower as yet to bloom.
It is snowing a flake; and he half knew
Winter was only playing possum.
Except in color he isn't blue,
But he wouldn't advise a thing to blossom.

The water for which we may have to look
In summertime with a witching wand,
In every wheelrut's now a brook,
In every print of a hoof a pond.
Be glad of water, but don't forget
The lurking frost in the earth beneath
That will steal forth after the sun is set
And show on the water its crystal teeth.

The time when most I loved my task
The two must make me love it more
By coming with what they came to ask.
You'd think I never had felt before
The weight of an ax-head poised aloft,
The grip of earth on outspread feet,
The life of muscles rocking soft
And smooth and moist in vernal heat.

Out of the wood two hulking tramps
(From sleeping God knows where last night,
But not long since in the lumber camps).
They thought all chopping was theirs of right.
Men of the woods and lumberjacks,
The judged me by their appropriate tool.
Except as a fellow handled an ax
They had no way of knowing a fool.

Nothing on either side was said.
They knew they had but to stay their stay
And all their logic would fill my head:
As that I had no right to play
With what was another man's work for gain.
My right might be love but theirs was need.
And where the two exist in twain
Theirs was the better right--agreed.

But yield who will to their separation,
My object in living is to unite
My avocation and my vocation
As my two eyes make one in sight.
Only where love and need are one,
And the work is play for mortal stakes,
Is the deed ever really done
For Heaven and the future's sakes.
Posted by Hecate at 9:36 PM 1 comment:

The End Of The Conference Call 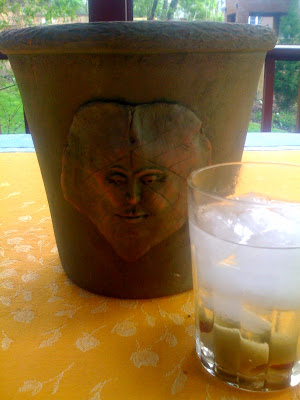 Why I Am A Witch 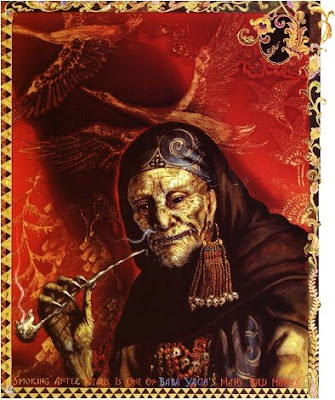 Gus has up another typically thoughtful post about Starhawk's recent call -- in response to the question posed to her -- for the pope to apologize to witches. I agree, unlike some other thoughful Pagans, with Starhawk. What the catholic church did to witches was horriffic and the church should apologize for it. That doesn't mean that I am all wrapped up in victimhood, anymore than calls for the U.S. to apologize for slavery mean that African Americans are all wrapped up in victimhood.

One of the reasons many of us modern-day Wiccans still proudly call ourselves Witches is to consciously identify with the victims of those persecutions. The Witch persecutions are a suppressed history of abuse. Just as suppressed memories of childhood abuse can hamper us in adult life, suppressed cultural histories still constrain our emotions and our imagination in subtle ways. The Witch persecutions left a residue of fear inside women--that if we speak too loudly or too forcefully, become too strong or visible, we will be attacked. They made imagination, intuition, and magic suspect. They set a pattern that judicial torture is sanctified once your enemy has been labeled 'evil'. And they made nature herself something a dangerous and suspect.

We use the word "Witch" consciously, as a way of reclaiming our power as women and as men. . . .


Gus is bothered by those words, and says:

I think it is a bad reason, and not one worthy of legitimizing. I call myself a Witch and likely always will. It was a word Gerald Gardner's New Forest coven used, and accurately describes many of the activities we do, activities that were savagely persecuted until not that long ago. But I never used the word to "consciously identify" with victims of persecutions.

I know that the first moment that I understood how Pagans and Wiccans used the word "witch," something deep inside me responded; I knew that I'd been a witch all my life and using the word was a kind of coming home for me. But I do also use it deliberately to identify (grammar error! I know, but it's late and Roddenberry got rich on it) with the victims of the witch hunts, including the many (likely majority) of those women who probably considered themselves good xians. I want to identify with the part of the word "witch" that makes people uncomfortable. I want to continue to be "out there" and "in your face" about being a witch. For me, being a witch is all about being the somewhat unacceptable old wild woman who lives outside the boundary of the lawful village, gives the powerless charms against the powerful, provides herbs when the male doctors were reduced to using leeches, understands the things that "nice" women didn't understand, went out into the dark when "good" women were home abed. You know, the women that the catholic church rounded up and burned.

Would I, like Gus, call myself a witch even if the xians had never persecuted women by labeling them witches? I think that I would. But, like Starhawk, part of the deep identification that I have felt with that word is a desire to identify with those who were persecuted, with the women who were made to seem ugly, mad, dangerous. That desire has much more to do with my emotional commitment to the word than, say, Gerald Gardner's use of the term.

That Sound That You Hear 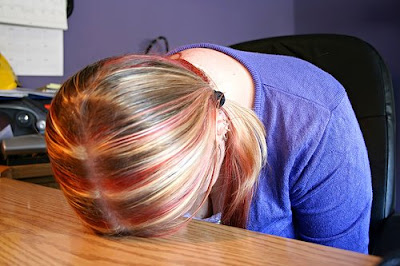 is me, banging my head on watertiger's desk.


Kali on a cracker, Pagans, just stop it. Stop cooperating with this kind of bullshit, even if it does "publicize" your "New Age" shop.

Update: To clarify, my objection is to yet another "witches aren't really Satanists and don't really worship the devil" article. It's long past time that Pagans quit participating in these. I don't see Catholics having to assert that they wouldn't really attack the U.S. if told to do so by the pope or Jews explaining that, no, they don't kill xian babies. At this point, "witches aren't really Satanists" articles serve to perpetuate, rather than dispell, the ugly stereotypes and leave the Pagan subject of the article sounding defensive. Just stop it.
Posted by Hecate at 4:51 PM 2 comments: 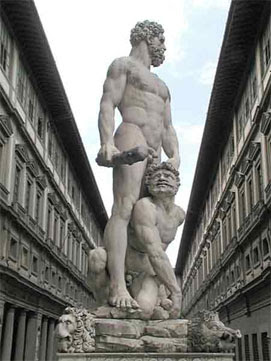 What Phila Said. This bullshit would be laughable, if it weren't taken so seriously.


Picture found here.
Posted by Hecate at 4:40 PM No comments: