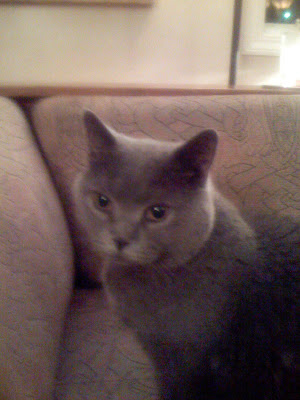 Miss Thing lives to be admired.
Posted by Hecate at 3:41 PM 3 comments:

Thanks, Obama, For Giving The Christianists Another Win. And They Won't Vote For You, Anyway. 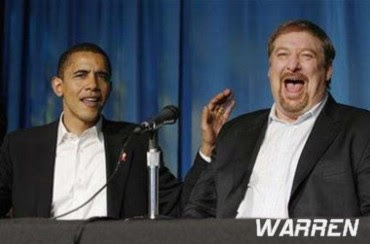 Now what is it about this that is so difficult to understand?

At the risk of heresy, let it be said that setting up the two presidential candidates for religious interrogation by an evangelical minister -- no matter how beloved -- is supremely wrong.

For the past several days, since mega-pastor Rick Warren interviewed Barack Obama and John McCain at his Saddleback Church, most political debate has focused on who won.

Was it the nuanced, thoughtful Obama, who may have convinced a few more skeptics that he isn't a Muslim? Or was it the direct, confident McCain, who breezes through town-hall-style meetings the way Obama sinks three-pointers from the back court?

The winner, of course, was Warren, who has managed to position himself as political arbiter in a nation founded on the separation of church and state.

The loser was America.

In his enormously successful book "The Purpose-Driven Life," Warren begins: "It's not about you." Agreed. Nor is this criticism aimed at Christians, evangelicals, other believers or nonbelievers -- or at Warren, who is a good man with an exemplary record of selfless works. Few have walked the walk with as much determination or success.

It is true that no one was forced to participate in the Saddleback Civil Forum on the Presidency and that both McCain and Obama are free agents. Warren has a right to invite whomever he wishes to his church and to ask them whatever they're willing to answer.

His format and questions were interesting and the answers more revealing than what the usual debate menu provides. But does it not seem just a little bit odd to have McCain and Obama chatting individually with a preacher in a public forum about their positions on evil and their relationship with Jesus Christ?

The past few decades of public confession and Oprah-style therapy have prepared us perfectly for a televangelist probing politicians about their moral failings. Warren's Q&A wasn't an inquisition exactly, but viewers would be justified in squirming.

I'll just add that I blame Obama even more than I blame Warren or McCain. Obama's the Democrat. He's supposed to fucking know better.
Posted by Hecate at 5:22 PM 5 comments:


I'm going to take G/Son. I used to take another little boy.

Don't Tell Me Prachett Was Never In A Coven

How our planning meetings generally go.
Posted by Hecate at 7:41 PM 2 comments:

Listen To The Wind 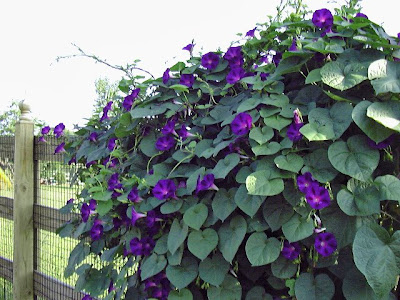 It's mid-August, just past the full moon between two dark moons in the same month. It's that point on this whirling ferris wheel of a planet when things seem to pause, just at the top of the wheel, although the wheel is really moving madly along.

Here in northern Virginia, it's been v, v dry, no rain for weeks. I'm back into the triage watering of last summer, when we were in a deep drought. The first v few green acorns have already started falling off the oak trees and hitting my roof. They scare Miss Thing now, but, by September, she'll ignore them.

There's something about the beginning of Autumn, even the Indian Summer of early Septembe,r that instills a sense of purpose, that gets me motivated. When I was in school, I loved the fat new notebooks, the sharpened pencils, the sense of possibility that came from cracking the spines of brand new textbooks. I make new year's resolutions at Samhein, and the time from Lughnasada, through Mabon, on to Samhein is time to get serious; time to dig down and try to accomplish whatever's left undone.

It's coming. If you listen, you can hear the cold wind blowing leaves in swirls around your feet.

Labels: Wheel of the Year 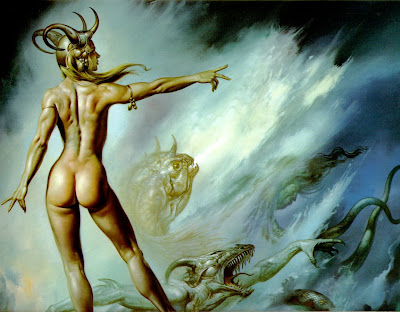 The post-Christian era is upon us, and the longer the two major political parties court 25% of America's religious adherents to the near-exclusion of nearly everyone else, the sooner they experience irrelevance as that demographic becomes just one voice in a cacophony of faiths and philosophies.

I hope Mr. Purpose-Driven (as if life were something to be "driven" ick!) Warren adopts a vow of silence tomorrow. Mr. Obama, every time that I'm about to open my checkbook, you find a way to make me close it. Just saying. You can balance my money v all those donations you think you're going to get from fundies and make your own determination. 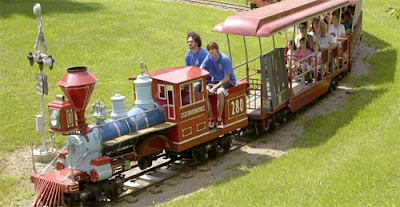 So this morning, in spite of not getting to sleep until 11:00 last night, G/Son rolled out of bed at 7:00 am and announced, with a satisfied smile, "Nonna! I waked up!" We should all approach the day like that!

We had some breakfast and played around in Nonna's yard and then, in Nonna's neverending effort to educate, we went to the lovely Whitman Walker garden and fed the koi fish and walked the labyrinth. "Nonna! I'm walking the path! Nonna! I got to the sitting rock!" Not meditative, but good.

Then, Nonna's plan was to find the nature center with the bee hive under glass, and the slice of a big tree showing all the rings, and some turtles. But Dinoysis, whom I believe guards this child, intervened. Nonna took the wrong entrance into the park and there, instead of a nature center, as G/Son immediately noted, was: A carousel!

When we went to buy a ticket for the carousel, there was a small locomotive that goes all around the park. G/Son adores trains above all else and he said: Look! Nonna! A train! A red one!

G/Son: Yes, Nonna! You and I can ride the train!

And, so, we did. We were the last pair to get on the train for this ride and we sat directly behind the conductor. Waiting in line, G/Son was literally jumping up and down and saying, "I'm happy! I'm happy!" He held my hand all the way through the park and periodically looked up at me to say, "Nonna, we're riding. We're riding the train." I don't know if it gets any better than this, and here's my admission against interest to Life, but, you know, for me, at least, it doesn't have to. If this is the apogee of how good it gets, well, it got better than I ever had any reason to expect that it would.

After we got off the train, we rode the carousel. Because, as Auntie Mame famously announced, life's a banquet and some poor suckers are starving to death. Not G/Son and me. Not us.
Posted by Hecate at 2:12 PM 3 comments: 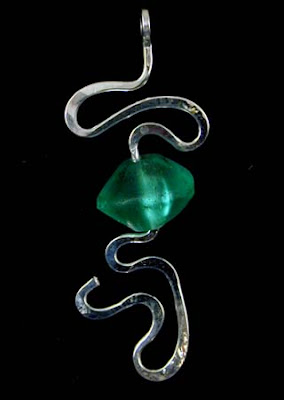 I drove past the beautiful Potomac River Saturday morning and it was the exact shade of bottle-green jade that can only be described as Summer River Green. Of course, it made me remember this poem:

Nymph, nymph, what are your beads?

Green glass, goblin. Why do you stare at them?

Give them me.
No.

Then I will howl all night in the reeds,
Lie in the mud and howl for them.

Goblin, why do you love them so?

They are better than stars or water,
Better than voices of winds that sing,
Better than any man's fair daughter,
Your green glass beads on a silver ring.

Hush, I stole them out of the moon.

Give me your beads, I want them.
No.

I will howl in the deep lagoon
For your green glass beads, I love them so.
Give them me. Give them.
No.


I went to a knitting class at Stitch DC; all of the knitters there were far, far better than I. Interesting group of women, all ages, various ethnicities, sitting on Capitol Hill, comfortably silent for long stretches, with only the clack of knitting needles. Of course, we sat in a circle. It's what women do, and it's powerful. I learned a new way to cast on stitches and a new way to increase a stitch. We'll see if that's enough for me to make my first pair of mittens w/ a thumb.

I drove back home past the beautiful Potomac River. By late afternoon, it was giving back to the sky the same lovely blue color that the sky was giving to the river. Boats dotted the river just as fluffy clouds dotted the sky. I could only think: As above, so below. It's all real; it's all metphor. There's always more.

I stopped on the way home for more of the free mulch that Arlington County gives away. All of the lovely, dark leaf mold was gone, but I got two big bags of wood mulch.

Spent the evening w my G/Son. We read Mother Goose. Life is good. May it be so for you.


Green glass bead found here.
Posted by Hecate at 12:04 AM No comments: