Shopping Within Your Watershed 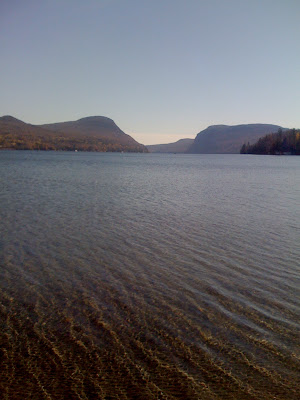 NTodd and I discuss the importance of Buy Nothing Day.


Photo by the author. A lake in Vermont near NTodd's and Ericka's cabin.
Posted by Hecate at 3:56 PM 2 comments: 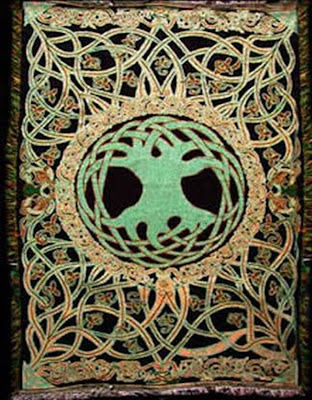 At our recent planning meeting, I agreed to put together some information for my wonderful circle of amazing women on grounding. So I've been thinking quite a bit, lately about grounding.

I had some difficult medical tests to get through this week (all turned out v, v well) and, throughout the procedure, I was worried, uncomfortable, angry, scared. What I kept doing, over and over throughout each step of the procedure, was to ground. The first reason was because, that was about as much magic as I could muster under those circumstances and the second reason was because, grounding works. It reminds me, on a cellular level, that I'm going to be OK, no matter what happens. And that, of course, allows me to respond as a witch, to realize that there's room for me to choose how to respond to, handle, create new possibilities within, change consciousness at will in response to whatever the medical procedure entails, discovers, produces. As Mary Oliver said in her lovely poem about corn growing:

let the immeasurable come.
Let the unknowable touch the buckle of my spine.
Let the wind turn in the trees,
and the mystery hidden in the dirt

swing through the air.
How could I look at anything in this world
and tremble, and grip my hands over my heart?
What should I fear?

One morning
in the leafy green ocean
the honeycomb of the corn's beautiful body
is sure to be there.

That's what grounding does for me.

The first several hundred times that I grounded, I would say to myself, "I'm not really grounding. I don't really have roots that can grow into the ground and hold me to Mother Earth. I'm just imagining, no, I'm just pretending. This isn't witchcraft. I'm not a real witch. This can't be what they're talking about. I must be doing it wrong. I'm not a good witch; I don't know what I'm doing; this is messed up. I should stop. I should stop doing it wrong and figure out how to do it right, find a good teacher, regroup, stop."

Posted by Hecate at 7:06 PM No comments:

How on Earth did no one think of this before?

(You have to click the link for Tarot and then select Transparent Tarot.)

How To Behave In A Crisis 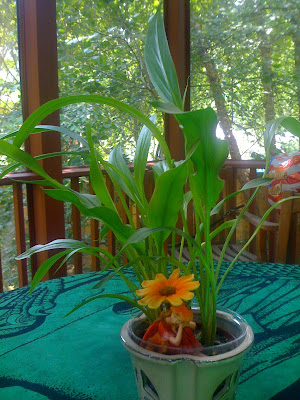 Byron Ballard has a brilliant article up at Witchvox about what to do in extremis:

Go outside and activate the spirits of the land on which you live. This can happen in a backyard, in a woodland temple, on the balcony of your high-rise apartment. Feed them (I give mine milk, corn liquor, cheap bright candy) and honor them and talk to them. And it’s best to do this when you aren’t in a crisis, so that they know you. It is always a good idea to build a relationship before you go asking for favors, don‘t you think? Ask the spirit of that maple tree, or that rock or that hill to be with you in your hour of need. Ask them to guide and inspire you, to support you and to be your friend on the other plane.

Then come inside and clean off your home altar, the primary one. Dust the table, put on a clean cloth, make an effort to set up this beautiful focal point, , this place between the worlds where you will petition the gods. Burn some incense, add some flowers, whatever you do to make it fresh. My advice is to work directly with your own gods, the ones you honor all the time. If you are dedicated to Artemis, ask her to stand with you, to show you what you need to see. You don’t need to go to Brigid for healing if you don’t have a relationship with her. Go first to your matrons, tell them the story, ask for help, ask for blessings.

Next, set up an Ancestor altar and actively engage your Ancestors. Your actual Ancestors--your mom or great-uncle or your older sister who died when you were ten. Feed them, honor them and be very clear about how important they are to you and how much you need their help.

Now look at your life--what do you need? To banish something? To call something to you? Do you need to stand under a full moon and say the most important prayer--“thank you”? If you need to create a ritual of thanksgiving, then do it. Make it pure and simple. Get a babysitter, if you need to. Fling yourself before your altar, if that feels right.

Does your need require a spell? Then do one. Don’t spend days researching the books of spells or Google-ing your request. Just do it. Make it up as you go along. Check the phase of the moon, and out of your need and your love, create a spell and do it. Raise a circle of pure energy and do it.

Do all these things and do them all again, if need be. Clarify your need and request for yourself and for your helpers both seen and unseen. And if nothing changes, consult an astrologer, get a tarot or rune reading, and try to figure out why this is happening to you now. Why again? Is there a lesson you need to be heeding? Are you facing the same challenges again and again? Why? What lesson are you not learning? And why not?

Many books have been written about daily spiritual practice, most of it from the Christian traditions. When tragedy--or merely drama--strikes, they have recourse to heavy-duty praying, just as we do. But if they--and we--have cultivated a clear series of steps to get grounded and feel our connection to the Divines, it can make those scary times a little less stressful..

Start the morning by grounding yourself and finish your day by looking at the moon and saying your prayers. There is comfort there and connection.

It's All Just God Pouring God Into God 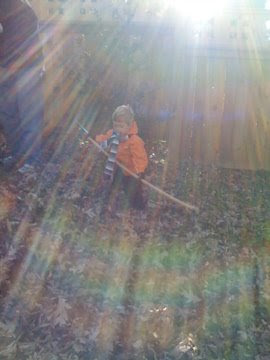 One of the things that I do consciously try to do is to help G/Son to appreciate nature. We went to a nearby nature center this weekend and it was nice: a little place in the woods with shells and animal bones and rocks and plants. Outside was a huge banner of the Earth and G/Son surprised me by pointing to it across the meadow and saying, "Look, Nonna! It's the Earth!"

But the most magical thing of all happened when we were leaving, just at dusk when the center closed and we started up the winding walk through the woods to our car. I could hear the rustling in the forest next to the road and stopped to look carefully, reaching for G/Son's hand in case what I heard was a buck about to come angrily out of the woods. But it wasn't. It was a lovely, graceful doe, white-tailed and grave, who came to the edge of her wood to stare at us across the three or four feet of road. I know: we're supposed to consider them pests and tick-carriers and blah blah blah. I love them. I can go years and not see one, but the times in my life when I've really needed reassurance about something important, they show up.

I became completely still and whispered, "Look, G/Son. A deer." We'd just seen pictures of deer inside the nature center and, when he turned, I think that's kind of what he was expecting to see, but he saw her, almost one with the dusk and the forest full of doe-colored leaves. He became completely still, too, expect for his eyes, which grew as wide as saucers. And then he whispered something to the deer that he's heard me whisper to squirrels and birds and butterflies: "I would never hurt you." And it had the same effect upon her that it often has on animals. She remained where she stood and simply watched us.

After a few minutes, we began to walk back up the path, still holding mittened hands and not speaking. She moved across the road, through the meadow on our side, and into the woods that border the meadow. When we got to our car, G/Son said to me, "That was Bambi. For real."

And this morning, he helped Son rake leaves.
Posted by Hecate at 2:38 PM 8 comments: