Maybe In Any Language 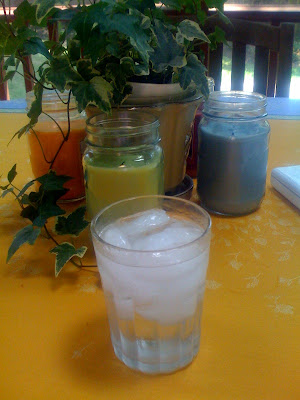 
I came out onto the screen porch several hours ago to do some work. But there's a breeze from the SouthWest that keeps making love to the leaves -- and their lovemaking makes the shadows on the lawn dance. There are cardinals and bluejays and mourning doves and mocking birds and sparrows and squirrels at the feeder and dappled shade in the woodland garden and -- well, I have done none of the briefing that I meant to do today. But I have done something else that I do -- that we all do -- far too seldom. I have been really present in my body; I have appreciated; I have replenished the almost-empty cistern of my soul. I've gotten better acquainted with this bit of land, the spirits of this place, Summer.

Labels: A Witch's Job Is To Turn The Wheel, Air, All Acts Of Love And Pleasure, They Say A Witch Lives Here

The Hands And Throats Of The Goddess

Music-thanatology - "Thanatology" derives from "Thantos," the Greek word for death - has been around in various forms for centuries.

In a white-walled hospital room, pancreatic cancer slowly drained all the life that remained in Carolyn.

There was nothing more to do for this 62-year-old woman - no oxygen or other life support, just a morphine drip to keep her as comfortable as possible.

That, and the ministrations of Jane Franz.

Franz brought her harp to the foot of Carolyn's bed, and started to play, weaving a hypnotic and soothing melody. Occasionally, she paused to adjust to the rhythm of Carolyn's heartbeat and breathing. After 20 minutes, the last notes settled like a benediction over the room.
Posted by Hecate at 1:01 PM No comments:

Call And Answer By Robert Bly 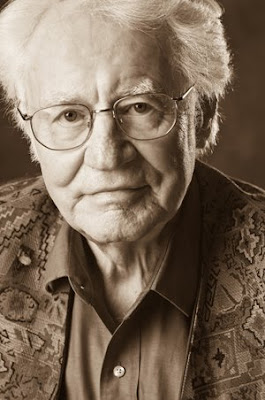 Tell me why it is we don’t lift our voices these days
And cry over what is happening. Have you noticed
The plans are made for Iraq and the ice cap is melting?

I say to myself: “Go on, cry. What’s the sense
Of being an adult and having no voice? Cry out!
See who will answer! This is Call and Answer!”

We will have to call especially loud to reach
Our angels, who are hard of hearing; they are hiding
In the jugs of silence filled during our wars.

Have we agreed to so many wars that we can’t
Escape from silence? If we don’t lift our voices, we allow
Others (who are ourselves) to rob the house.

Some masters say our life lasts only seven days.
Where are we in the week? Is it Thursday yet?
Hurry, cry now! Soon Sunday night will come.

Posted by Hecate at 9:55 PM No comments: 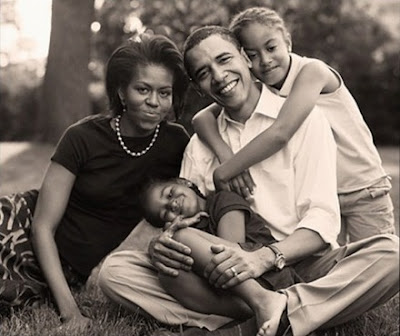 Michelle Obama brought her daughters and their grandmother to Virginia!

Day trips are appealing to even the most influential of families.

On Thursday, first lady Michelle Obama took her daughters Malia and Sasha, along with her mother, Marian Robinson, on a daylong visit to central Virginia, according to The Associated Press.

The White House day trippers made a stop at Luray Caverns, a popular Shenandoah Valley attraction, where they were treated to a private tour of the caves that feature geological formations known as stalactites and stalagmites. Luray Caverns is a U.S. Natural Landmark and home to the Great Stalacpipe Organ, one of the world's largest musical instruments. After the visit, they reportedly had lunch at the Brookside Restaurant near Luray, Va.

Their next stop was Monticello, the historic home of Thomas Jefferson. The estate was closed to visitors during the Obamas' VIP tour.

"We're very happy that they chose to visit Monticello," Wayne Mogielnicki, director of communications for the historic home, said in a statement. "We're thrilled. We hope they enjoyed it. If any other members of the Obama family want to come visit, I'm sure we'd be glad to have them too."

The group received a private tour and then had dinner at The Virginian in nearby Charlottesville. Restaurant owners Andy and Patrick McClure told WVIR that the Obama family ordered up Virginian crab cakes, southern fried chicken and steak.

Before they left town, the group sampled a Charlottesville tradition: ice cream at Arch's on the Corner.

Picture found here.
Posted by Hecate at 5:06 PM No comments:

What IS The Plural Of Caladium? 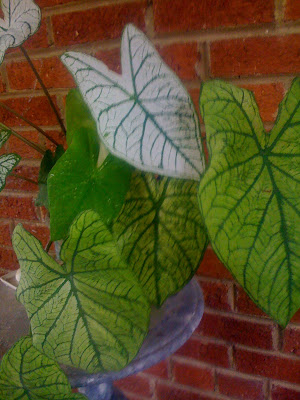 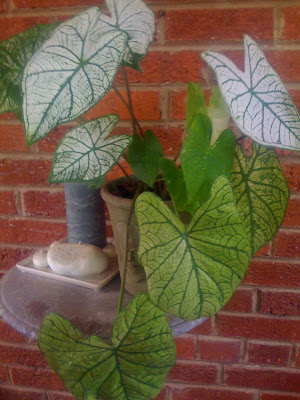 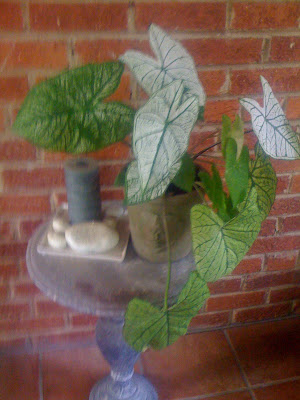 If I lived farther South, I'd love to grow masses of caladium (Caladia?). As it is, I have one in a pot that I keep on the screen porch during the Summer and, then, barely-kinda-sorta manage to keep alive, inside, during the winter. Thirsty little bugger.

They're too expensive for me to grow them as annuals, which is what they are here in Zone 7. They do make wonderful container garden displays, though, if you can afford them, and, if I had a Victorian or a Gothic garden, I would find a way to afford them.
Posted by Hecate at 3:35 PM 2 comments: 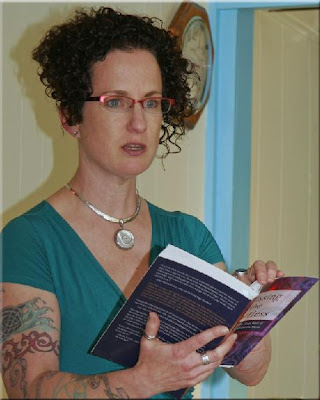 Every day, when I cast a circle, I say: "I am between the worlds. What I do between them affects them all." Big responsibility. But it's big whether we've cast a circle or not. Whether we're on metro, in line at Starbucks, online on blogs, slipping into dreams between clean sheets.

For me, this song is always about Lughnasadh.
Posted by Hecate at 10:18 PM No comments:

Closer And Closer To Lughnasadh

I've posted this before, but I love it so much that it's worth making an annual tradition out of it. Marion uses the more xian term, "Lammas," but that's ok. I love the way she says it.
Posted by Hecate at 10:10 PM No comments:

Amy In DC In August 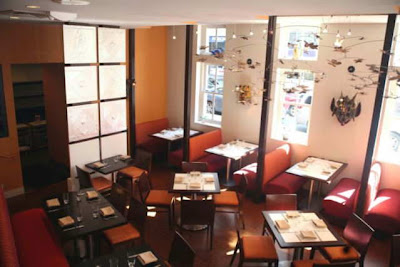 Seems that [F]irst lady Michelle Obama, is not sitting at home twiddling her thumbs, either.

A frequent diner at local hot spots, the missus was spotted downtown at Oyamel, an upscale Mexican restaurant, where she was breaking bread with White House sous chef Sam Kass.

Our loyal spy tells us "the Secret Service manning the front door (and frisking entering customers) were attracting a crowd, and passers-by were trying to get a glimpse through the window. She ate in the private dining room in the back."

Picture found here
Posted by Hecate at 11:11 PM No comments: 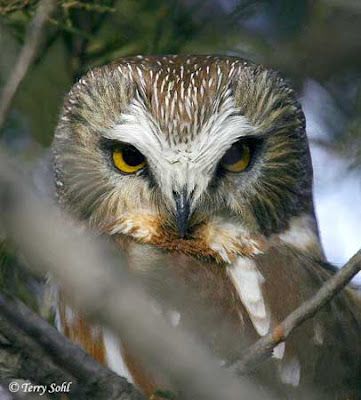 Of Adam's first wife, Lilith, it is told
(The witch he loved before the gift of Eve,)
That, ere the snake's, her sweet tongue could deceive,
And her enchanted hair was the first gold.
And still she sits, young while the earth is old,
And, subtly of herself contemplative,
Draws men to watch the bright web she can weave,
Till heart and body and life are in its hold.

The rose and poppy are her flower; for where
Is he not found, O Lilith, whom shed scent
And soft-shed kisses and soft sleep shall snare?
Lo! as that youth's eyes burned at thine, so went
Thy spell through him, and left his straight neck bent
And round his heart one strangling golden hair.


Picture found here.
Posted by Hecate at 10:15 PM No comments: 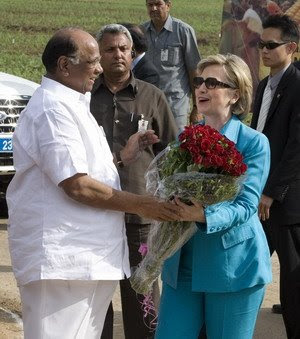 Even Obama's Secretary of State is making restaurant news:

The restaurant Bukhara here is widely regarded as the finest in India, if not one of the best in Asia. The atmospheric and casual spot in the ITC Maurya hotel is known for its mouth-watering kabobs, perrfectly cooked over spits in view of the patrons.

It also happens to be a Clinton hangout. After then-President Clinton ate at Bukhara in 2000, the restaurant created a special Bill Clinton "presidential" platter in honor of his visit.

Secretary of State Hillary Rodham Clinton is also a Bukhara fan, and she made sure to have dinner there Sunday night with seven of her staff members. The chef prepared a special selection of eight dishes, plus naan bread and a desert of kulfi, a tasty Indian ice cream.

Sure enough, the restaurant announced that the meal prepared for the Secretary would henceforth be on the menu as the "Hillary platter."

Hillary has been staying at the Taj Palace but she walked in next door at the ITC Maurya Sheraton to eat at Bukhara, her “favourite Indian restaurant in the world”. Getting there around 8.30 pm, she ordered most of the signature dishes — dal bukhara, murg malai, seekh kabab, paneer tikka, raita, naan and some others — and had kulfi for dessert. She, however, didn’t order from the “Clinton Platter” or the “Chelsea Platter”, named after the former first family of the US.

Picture found here. What is it about India that liberates American women and allows them to wear COLOR? Well, as Vreeland noted, pink is the navy blue of India.
Posted by Hecate at 5:56 PM 2 comments: 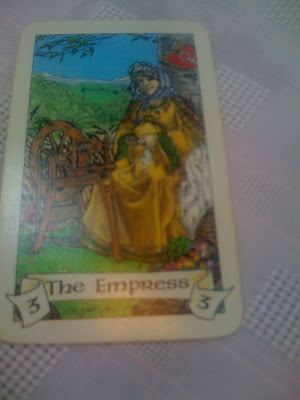 G/Son came over yesterday to spend the night with me. When he and his 'rents got here, I was sitting on my screen porch with a glass of iced tea, the computer, and, left out from the night before, my Tarot deck.

G/Son, at 3 1/3, is into games. We often play Hi-Ho-Cherry-O, sometimes according to "the" rules and sometimes according to rules that we make up as we go along because, Goddess knows, someone's going to teach him to color within the lines, but it's not likely to be his Nonna, the witch. This weekend, we tried our hands at Chutes & Ladders.

G/Son saw the tarot cards and said, "Nonna, Can I play?"

He immediately remembered that one time I'd brought them over to his house to give DiL a reading after she got her mammogram. He was pulling out the cards and exclaiming over the pictures: "Look, the horse's legs are on fire!" -- Knight of Wands, and "Look, she has a sword!" -- Queen of Swords. He asked, "Nonna, how do you play?"

I told him, "Well, I don't play a game so much as I look at the pictures and think about what they mean." Flipping over to the Empress, I said, "See, I look at her and I see that she has food all around her and enough wool to make yarn and she's going to have a baby, so I think this card means that everything will be ok, there will be enough, and new life is coming." G/Son said, "Why she is going to have a baby?" and I showed him how her belly is big because there's a baby in there. G/Son had a few questions about that and then he looked at the picture and said, "And, she has a watermill."

He was pointing to the Empress' spinning wheel. And I said, "Yes, she does. To me, that looks like her spinning wheel, to make wool into yarn, but if you see the wheel from a watermill, that's what it means for you." Of course, I will never look at that card again w/o seeing the wheel of a watermill, going round and round, grinding grain into flour for bread and plenty, and grinding each of us to create transformation.

I love that kid.

Photo by the author of the Empress card from Robin Wood's Tarot.
Posted by Hecate at 4:52 PM 1 comment: