What A Complete And Utter Ass 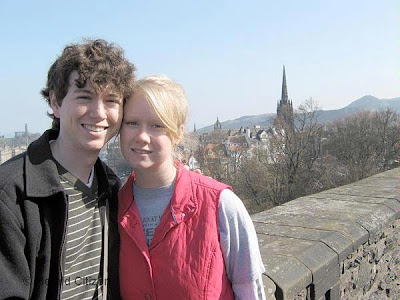 `And only one for birthday presents, you know. There's glory for you!'

Humpty Dumpty smiled contemptuously. `Of course you don't -- till I tell you. I meant "there's a nice knock-down argument for you!"'

`When I use a word,' Humpty Dumpty said, in rather a scornful tone, `it means just what I choose it to mean -- neither more nor less.'

`The question is,' said Alice, `whether you can make words mean so many different things.'

And, of course, we all know Humpty's answer.

If only there were a word that described people with no religion. It would make Ms. Burleson's job so much easier!

But Did She Order Elitist Mustard? 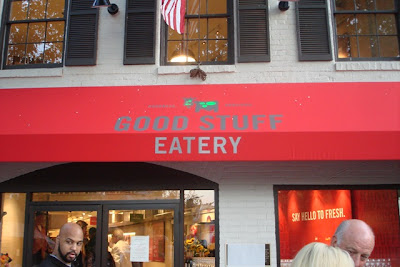 Looks as if the Obama's are in the pocket of the American Beef Institute.

Is the White House having a boutique burger taste test? At the end of a week that saw the president and vice president pay a visit to local cult fave Ray's Hell Burger in Virginia, first lady Michelle Obama dropped by Spike Mendelsohn's burger place Good Stuff Eatery on Pennsylvania Avenue over lunch, the White House confirmed.

Local blog DC365 was first to write on the visit, snapping a shot of the casually dressed style icon as she exited the building.

"She whizzed past us, waving and smiling, in a kicky little ponytail and grey capri pants, as the crowd shouted 'We love you!'" wrote the blogger.

The first lady was joined on the outing by her staff, said spokesperson Katie McCormick Lelyveld, who had recommended the place to her. "Our staff had been before and we had told her about it and it was great," she said. The outing was just one of several the first lady and her staff have made to local eateries for lunch, also visiting Five Guys Burgers and Fries and a barbecue place. "Sometimes you just need a burger," said McCormick Lelyveld. "It was her idea."

The group numbered 17-20 in size and sat on the restaurant's second floor, said Good Stuff Eatery spokesperson Micheline Mendelsohn, sister of Chef Spike, a former "Top Chef" contestant. There, they noshed on a selection of the joint's most popular fare. "We just made platters so everybody could taste different burgers," she said.

One of their prize-winning burgers is the Colletti Smokehouse: sliders with applewood bacon, sharp Vermont cheddar, fried Vidalia onions, and chipotle barbecue sauce,

I'll echo DC365: I do really love and admire how the Obamas are making this city their home, and taking part in the life and culture this city has to offer. They are some pretty hot neighbors.

Abstinence As Birth Control: Fail! U R Doing It Wrong! 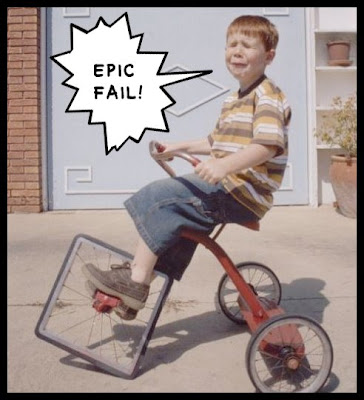 During the campaign, I was pretty adamant about not going after Sarah Palin for her parenting choices, nor after her pregnant, teen-age daughter, Bristol. I've been a pregnant teen-ager and a teen-age mom, and, under the best of circumstances, it's no bed of roses in this culture. But Bristol's decided to make the rounds of various talk shows; at least, I assume she, not her parents, made that decision. So I do intend to comment on one point. A few weeks ago, Bristol was interviewed and said, that telling young people to be abstinent is "not realistic at all."

That may not have gone over too well with someone, because, earlier this week, Bristol was back on the talk show circuit and this time, she kept repeating, bot-like, that "abstinence is the only way that you can effectively, 100%, foolproof way, to prevent pregnancy." The talking head in the first video says, "It is."

In the final video, the talking head interviewing the father of Bristol's child, says to him that Bristol now says that abstinence is the only "surefire way to prevent teen pregnancy. Which is true."

And if there's a population for whom abstinence is more likely to fail than for any other population, my guess is that it's teenagers and very young adults. This is a population charged with hormones, as well as a population that still hasn't gotten (and yes, these are generalizations) the notion that "it" can happen to them, whether "it" is losing control of a car after a few beers or getting pregnant after a few "abstinence failures." And, because they're practicing abstinence, which they've been told is 100% effective and foolproof, they're less likely to have a condom or some other method of birth control around "just in case."

It's one thing for Bristol Palin, who, as far as I can tell, never really got much education beyond junior high school and who has been raised in an extreme fundie church, to go around spreading misinformation about the effectiveness of abstinence as a method of birth control. But it's another thing for adult interviewers on television to agree with her. Kali on a cracker, how difficult would it be to say, "You say it's 100% effective. It's not. You used it and you got pregnant. You said a few weeks ago that it's not a realistic method of birth control for young people. Why have you changed your message?" 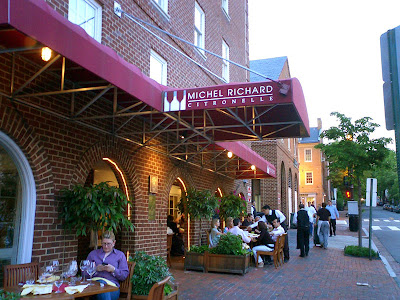 So it turns out that, while he likes burgers for lunch, the President goes a bit more upscale when it's date night. This weekend The first couple had their first date . . . since Barack and Michelle Obama took up residence at the White House.

The couple enjoyed drinks, dinner and dessert in a private room at the posh French restaurant, Michel Richard Citronelle, on Saturday.

Obama had salad nicoise and braised short ribs, a house specialty. Michelle Obama made a special request, ordering the lobster sandwich appetizer to be upsized to an entree.

Citronelle bills itself on its Web site as a "a reprieve from traditional East Coast-style dining ... as fresh and bright as the cuisine that graces its tables."

Citronelle's amazing, one of the top ten places I've ever eaten. It's great to see the Obamas out and about in DC; the Bushes acted as if the city didn't exist.

Obama Clearly Listens To What I Say


So, for weeks, I've been begging Obama to come eat in Arlington. Today he and Biden did just that.

- It's like this: When you want a burger, you have to have a burger.

In this state of mind, President Barack Obama and Vice President Joe Biden took a short — but wholly noticeable — motorcade ride from the White House to Virginia and pulled into a small, independent burger joint called Ray's Hell Burger.

The two leaders went right up to the counter where the meat was being grilled and ordered.

The restaurant, which prides itself on premium aged 10-ounce burgers, sits in a small strip plaza. The burgers sell for $6.95

Medium well? What's wrong with these guys? And, dijon mustard? That's your effete, liberal, East Coast, out of touch, communists, right there.

Seriously, though, Obama, come back with Michelle and the girls and Michelle's mom and have Mother's Day brunch at Willow. Arlington has a lot to offer.
Posted by Hecate at 6:06 PM 1 comment: 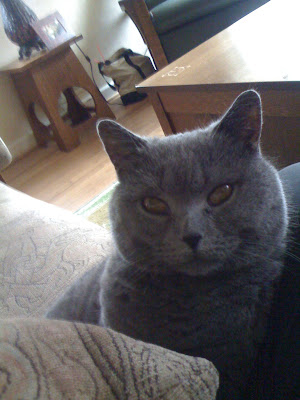 Early Beltane morning, when they were very thin, Miss Thing, my good grey cat, slipped between the veils. Just before she went, she climbed onto my bed, shoved me over, stretched one front leg out in her typical elegant pose, and we had a lovely snuggle. I pet her, she purred, life was good. Her purr was always amazing; I never once ceased to be amazed by the active grace of so much pleasure.

She was a very private cat, not too fond of strangers, but in the final years of her life, she opened her heart to the noisy, little, blonde boy who came careening into the place, tolerating him with supreme gentleness as he was learning to let her smell his hand before he began to pet her and gleefully announcing, "She's my buddy!"

View From The Porch, Two Days After Beltane 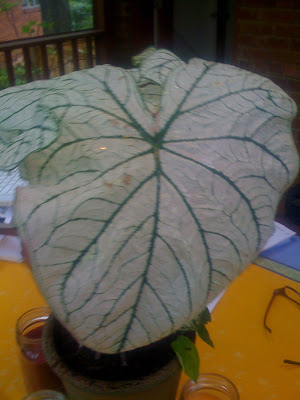 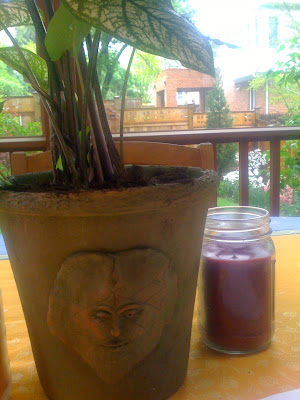 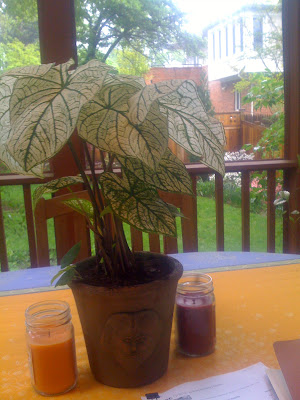 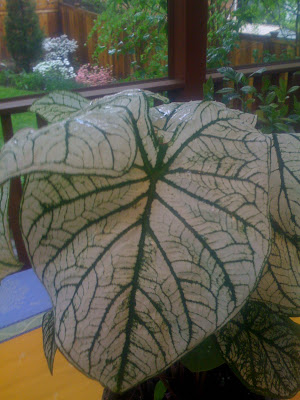 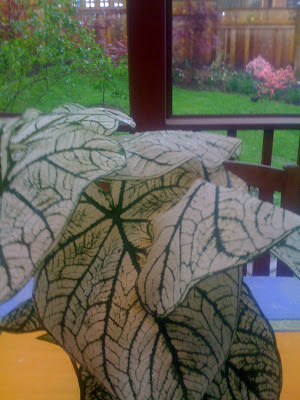