As Good As It Gets, And, Really, I'm A Mystic. I Would Know 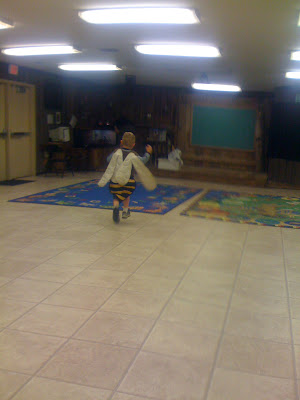 I picked G/Son up this morning and, on our way out, I asked Son if he'd come over and help me take my old hose off the spigot, put a new hose on the same spigot, and pick up a box of day lilies. As we were pulling out, G/Son said to me, "Nonna, you need some help?" I said, "Yes, Nonna's an old woman and sometimes she needs help with hard jobs." G/Son's response, as are most of his responses these days, was: "Why? Why you are an old woman and need help, Nonna?" I said, "Nonna's 53. She needs help sometimes." G/Son said, "I'm not 53; I'm three." I said, "Yes, you're three; next year, you'll be four." G/Son said, "Nonna, I told Mommy and Daddy that I want to be three for my whole life."

I had to pull over for a minute to wipe the tears from my old eyes.

I said, "Well, there's a lot to come before you have your next birthday and turn four. In September, Pop Pop will have his birthday, and then, in October, we'll have Halloween and you get to dress up like Batman and go trick or treating. In November, Daddy has his birthday and Mommy will cook Thanksgiving. Then, we'll have Yule when Santa comes." G/Son said, "Yes, and he will bring me a real toy T Rex with big teeth. Will we write Santa a letter?" I said that we would and then we had a long discussion about how the North Polar Bear always messes up Santa's plans. I said, "And then, in February, Mommy will have a birthday, and only then, after all that, we'll have your birthday and you'll turn four. And I bet four will be a lot of fun."

G/Son thought about all this and he said, "Nonna, it's like a circle." I said, "Yes, it is. It's like a wheel that keeps going around and around." G/Son said, "Will my birthday keep going around?" and I said, "Yes, it will. It will come around for as long as you live and, then, for as long as your loved ones remember it." G/Son said, "My loved ones will always remember my birthday."

Once again, the old lady is on the side of the road w/ the watery eyes.

So mote it be. May they call you at Samhein as far into the future as either of us can see, Dear One. What is remembered does not die.

We went to the park and rode the train through the woods. I said to G/Son, "I love the woods. Thanks for coming on this ride with me," and G/Son said, "Nonna, you don't want to be lonely in the woods, " and I said, "No, no I don't, but I am never alone in the woods." G/Son said, "We can ride in the woods together." We rode a tailless horse on the carousel, we climbed over a dead tree and, then, we rode a different horse on the carousel. We took a picnic lunch to the Nature Center and we discussed whether Batman is stronger than Spiderman or whether Spiderman, at his strongest, might actually be Batman dressed up as Spiderman. We concluded that sometimes, Batman dresses up as Spiderman. And we acknowledged that Shawney, G/Son's best friend, really, really loves Spiderman.

We went to the Nature Center and took a class on honeybees. G/Son explained to the v nice lady who taught the class, and to the other members of the class, six and seven year old girls all, that bees are helpful because they help us make pizza, which must have spinach which is good for your muscles, and tomatoes, and we need bees to pollinate all of those. And, we did a bee dance to show: the flowers are nearby, and we did a bee dance to show: the flowers are a long way away. We looked at a dead bee and we tasted clover honey, wildflower honey, and buckwheat honey. The witch's grandson asked, "Which is better for you when you are sick?" and the v nice lady said, "Any kind of honey will make your throat feel better when you are sick," and G/Son said, "Mommy gives me honey if I am sick. Not the buckwheat kind." We climbed over a lot of rocks and we learned that smoke makes honeybees think that a forest fire is coming so they eat a lot of honey and get sleepy.

G/Son's takeaway: Honey is "bee puke," but we say "regurgitation" instead of "puke."

On the way back to his house, G/Son "read" me the book on bees that the nice nature center lady gave to him. Next weekend, we are going to the firefly teach-in and the firefly picnic at the local nature center. I imagine that this is all pure grace; I can't believe that I've ever done anything, in any incarnation, to deserve this. 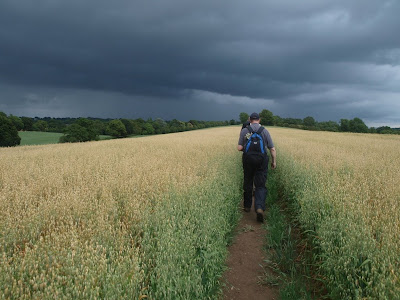 I'm not sure whether my brilliant friend Gromit or his lovely and accomplished wife, Dr. Mrs. Gromit, took this picture, but I love it and it's stayed with me for days since he first posted it. A whole lot of my life was like this. Walking through fields of absolute gold under threatening skies.
Posted by Hecate at 4:34 PM 4 comments: 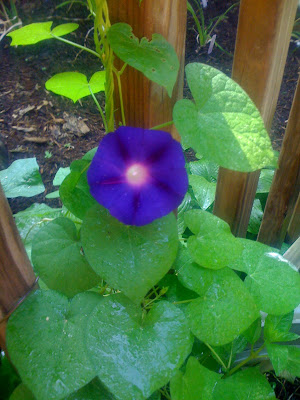 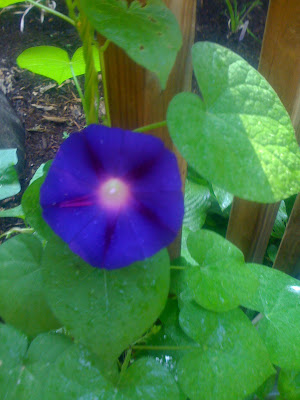 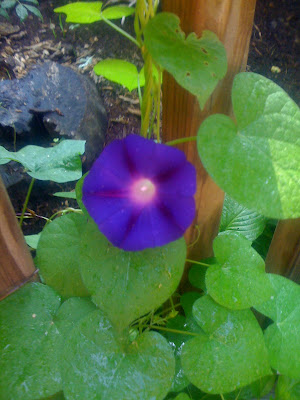 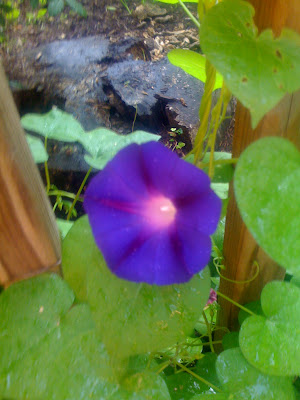 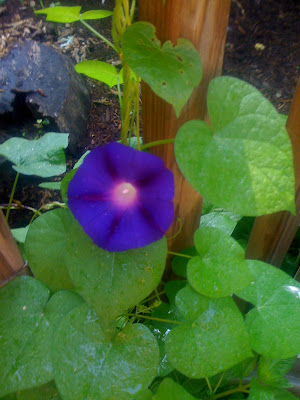 This is "Grandpa Otts" -- one of my favorite morning glories. Morning glories are considered invasive in Virginia, so I grow them in pots and try to be careful about harvesting all the seeds. I just love them too much to give them up.

Photos by the author. If you copy, please credit and link. Thank you.
Posted by Hecate at 4:05 PM 1 comment:

Son loved the book when he was little. G/Son and I are SO going to this.
Posted by Hecate at 10:58 PM 2 comments:

All Of A Sudden, It's A Problem? 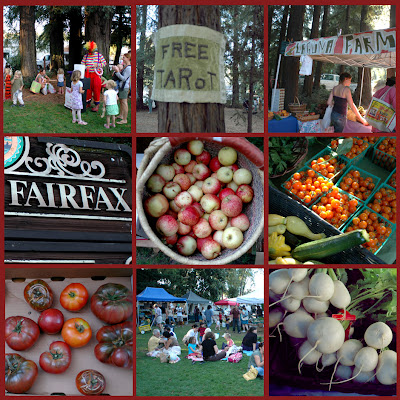 One wonders if a xian streetcorner preacher would be asked to leave, as well. If she's not charging, I don't see how they can make her follow their rules for vendors.

After spending the past six summers giving free tarot readings beneath the redwood trees of Bolinas Park, the Rev. Joey Talley, the "Good Witch of West Marin," has come to think of herself as a part of the Fairfax Farmers Market.
Managers at the Marin Farmers Market see things differently. The organization, which operates eight farmers markets throughout the Bay Area, says Talley has never applied to work as a vendor or entertainer at the Wednesday night market, and they've asked her to leave.
"We don't want the market to become a free-for-all festival," said market manager Amelia Spilger. "I've had to turn down (applications from) masseuses, chiropractors and holistic healers. They all have a place in the community, but we have limited
space in the market."

Walk In The Woods

Posted by Hecate at 9:58 PM No comments:

Check out just a few of the new words:

Find the definitions here. I knew most, but I admit that I figured "memory foam" meant the way that, at my age, you kinda-sorta remember that you read or heard something about something related to the topic, but you can't remember exactly what or exactly where. And I didn't know "haram," either.

Labels: Sit Down At A Typewriter And Open A Vein

I Bet That I Could Still Write Briefs On The Side 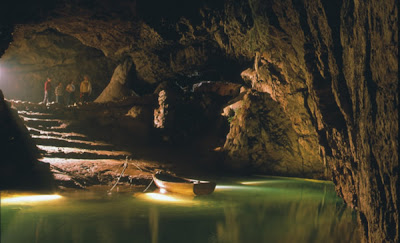 But only if the cave has wireless..

"Wookey Hole is advertising nationally and hopes to attract a strong field of candidates with the £50,000 serving as a major incentive," said the site.
It said ambitious witches looking for a "key career move" should arrive dressed for work armed with any "essential witch accoutrements".
Due to sexual discrimination law, the job cannot demand that the post is filled by a woman.
Interviews, which will involve on-site assessment incorporating a range of standard tasks, will take place on 28 July at 1100, stipulates the advert.

Labels: She's a Witch, They Say A Witch Lives Here

Posted by Hecate at 9:15 PM No comments:

Labels: Derrick Jensen, Environment, We Could 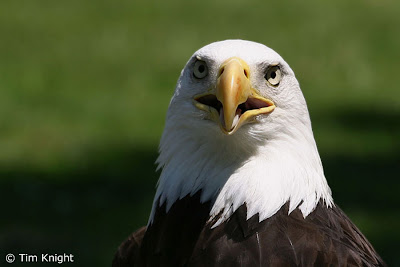 Thanks to Ankya, I've recently discovered:

Center for Bioregional Animism and

This morning, just before I woke up, I dreamed that I was trying to discuss animism and the immanence of divinity w/ Derrick Jensen. We had a great discussion before he turned into a large bird and then we had an amazing conversation. 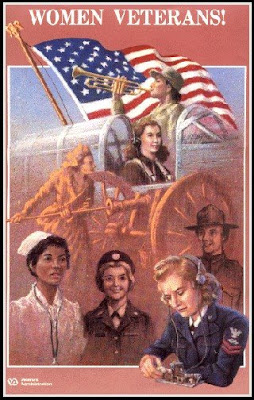 One out of every 10 homeless vets under the age of 45 is now a woman, the statistics show.

And unlike their male counterparts, many have the added burden of being single parents. ...

Overall, female veterans are now between two and four times more likely to end up homeless than their civilian counterparts, according to the VA, most as a result of the same factors that contribute to homelessness among male veterans: mental trauma related to their military service and difficulty transitioning into the civilian economy.

But while veterans’ services have been successfully reaching out to male veterans through shelters and intervention programs, women are more likely to fall through the cracks.

Poster found here.
Posted by Hecate at 8:53 PM No comments:

Respectable Pagan Blogistan Does Not Approve This Message 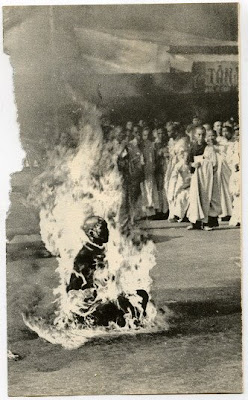 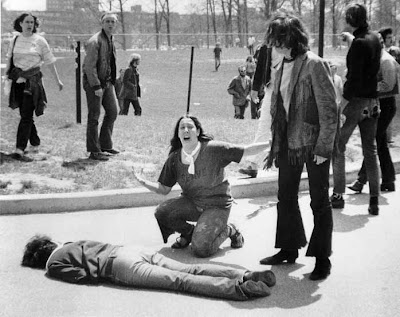 So Robert McNamara's dead at ninety fucking three, while some of the best of my generation died at his behest at 19, 20, 21. Others were shuffled off to Canada as "criminals." Others took drugs to escape. Others spent years underground.

My wish for him is that he get exactly what he's got coming to him, karmawise.

Fuck you , Robert McNamara. Don't let me find out where you're buried. I have a few things left to express physically.
Posted by Hecate at 8:14 PM 3 comments: 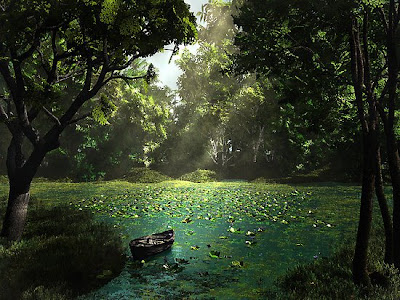 Nice article in the travel section of the NYT about the hometown of Mary Oliver, a poet with a deep sense of place.

People say to me: wouldn’t you like to see Yosemite? The Bay of Fundy? The Brooks Range?” she wrote in “Long Life,” a book of essays. “I smile and answer, ‘Oh yes — sometime,’ and go off to my woods, my ponds, my sun-filled harbor, no more than a blue comma on the map of the world but, to me, the emblem of everything.”

Be sure to check out the slide show.

Picture found here.
Posted by Hecate at 9:32 PM No comments: 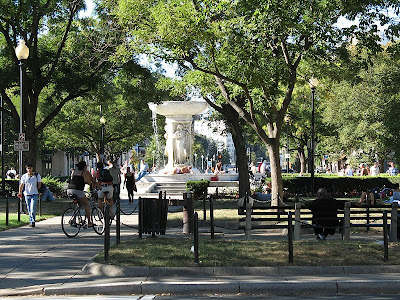 Turns out, there are no African Americans in Washington, D.C. Who knew?

And the WaPo wonders why it's become completely irrelevant? 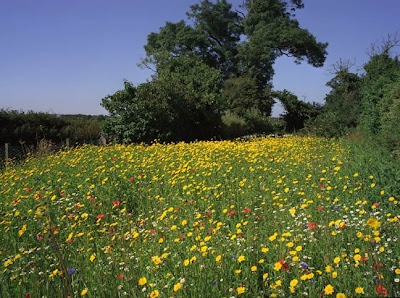 I NEVER wholly feel that summer is high,
However green the trees, or loud the birds,
However movelessly eye-winking herds
Stand in field ponds, or under large trees lie,
Till I do climb all cultured pastures by,
That hedged by hedgerows studiously fretted trim,
Smile like a lady's face with lace laced prim,
And on some moor or hill that seeks the sky
Lonely and nakedly,--utterly lie down,
And feel the sunshine throbbing on body and limb,
My drowsy brain in pleasant drunkenness swim,
Each rising thought sink back and dreamily drown,
Smiles creep o'er my face, and smother my lips, and cloy,
Each muscle sink to itself, and separately enjoy.

Picture found here.
Posted by Hecate at 5:02 PM No comments: