Where The Truest Poetry Comes From 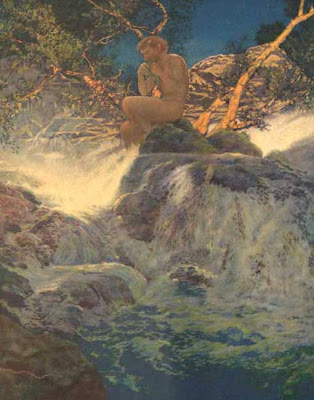 Our tradition is one of poetry, but it is also one of ecstasy that comes from direct contact with forces of nature and spirit. The truest poetry comes from this well of connection. The Gods move through us and the Elements of Life make up our breath, bones, and blood. The breeze sings through us and the ocean calls the water in our cells.

Picture found here.
Posted by Hecate at 4:08 PM No comments: 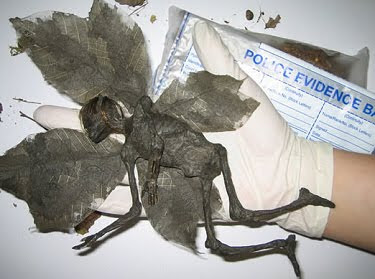 
Simple, seldom and sad
We are;
Alone on the Halibut Hills
Afar,
With sweet mad Expressions
Of old
Strangely beautiful
So we're told
By the Creatures that Move
In the sky
And Die
On the night when the Dead Trees
Prance and Cry.

Simple, seldom and sad
Are we
When we take our path
To the purple sea -
With mad, sweet Expressions
Of Yore,
Strangely beautiful,
Yea, and More
On the Night of all Nights
When the sky
Streams by
In rags, while the Dead Trees
Prance and Cry, 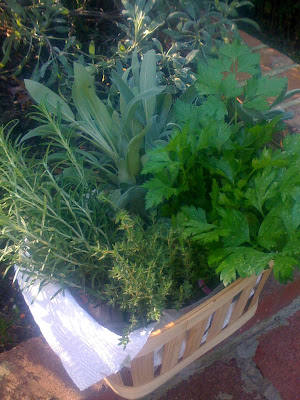 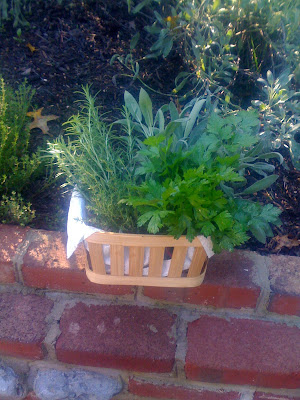 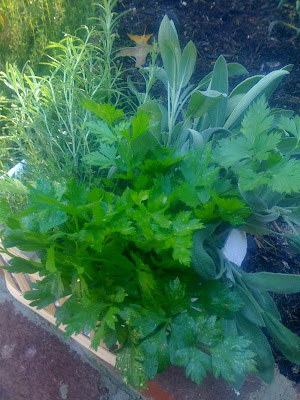 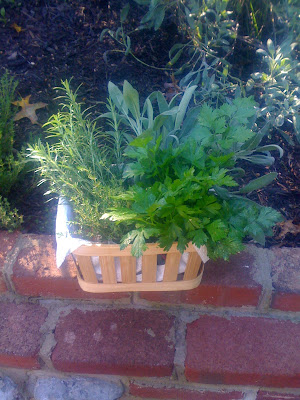 One of the best things about having an herb garden is picking herbs to take to friends. Here's a basket from this morning with just-picked Scarborough Faire herbs -- parsely, sage, rosemary, and thyme.

Photos by the author. If you copy, please link back.
Posted by Hecate at 3:04 PM No comments:

Llewellyn is bringing out a new book by Scott Cunningham, albeit that Scott passed through the veils in 1993. Llewellyn announced that:

Scott looked through scores of aged texts and studied with every teacher he could find to satisfy an unending curiosity. He yearned to create what he could not find in the existing Wiccan canon: a Book of Shadows based on past traditions, yet forward-looking—a true guidebook for Wiccan practice. He left our world before he could reveal it...or so it was thought.

Recently, one of his heirs discovered a battered manila envelope among Scott's papers. Hidden within it was a lost treasure that, to many of Scott's fans, is more valuable than gold-the manuscript for his long-lost book of shadows.

Llewellyn Publications takes great pride in presenting the most unexpected yet eagerly desired book in the history of Pagan publishing, Cunningham's Book of Shadows. Scott referred to the system that is published here for the first time as "American Traditionalist Wicca"—a melding of traditional Wiccan practice and Scott's own unique and inspired work. If you have followed the wisdom found in any of his previous books, now you can actually practice the system he developed and used in his own religious and spiritual tradition, bringing you closer than ever before to
Scott and his teachings.

For many of us, Cunningham's books were an entryway into witchcraft. It will be interesting to see how he reads lo these many years later. One early review bemoans the lack of an index.

Labels: So Many Books, Wicca 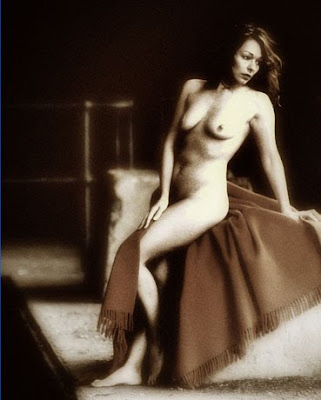 
Picture found here.
Posted by Hecate at 6:29 PM No comments:

Posted by Hecate at 5:31 PM No comments: 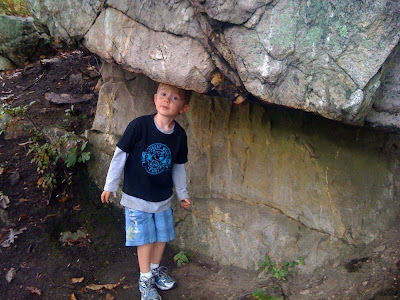 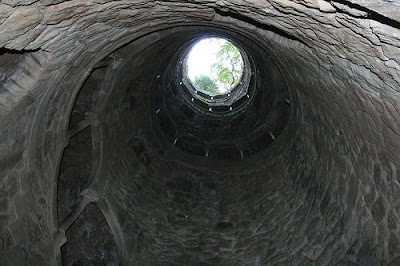 For Once, Then, Something

Others taunt me with having knelt at well-curbs
Always wrong to the light, so never seeing
Deeper down in the well than where the water
Gives me back in a shining surface picture
My myself in the summer heaven, godlike
Looking out of a wreath of fern and cloud puffs.
Once, when trying with chin against a well-curb,
I discerned, as I thought, beyond the picture,
Through the picture, a something white, uncertain,
Something more of the depths-and then I lost it.
Water came to rebuke the too clear water.
One drop fell from a fern, and lo, a ripple
Shook whatever it was lay there at bottom,
Blurred it, blotted it out. What was that whiteness?
Truth? A pebble of quartz? For once, then, something.

To Be A Witch 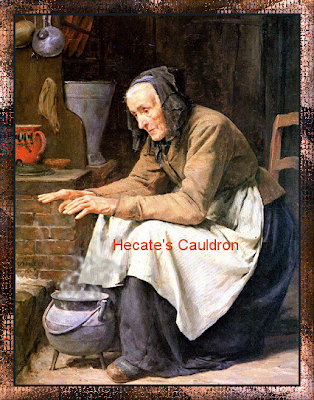 You are not a witch because you wear robes or elven jewelry or because you have black fingernail polish or because you burn incense in your apartment or because you learn to read tarot or palms or tea leaves. Stop allowing your physical image and your fear of death to substitute for a relationship with the divine.

In order to BE a witch, you must help to turn the wheel. You must sit down daily with the Goddess and the gods and develop relationship. How scary is that? You must ground. Also, scary, especially when done daily. You must be present, as a witch, as often and as frequently as possible. Ditto on the scary. You must do the work involved in developing a relationship with the land, the watershed, the trees, the herbs, the wildlife, the rocks -- everything -- in your sacred space. Again, scary. You must change the world with magic, challenge those in power, heal the sick and powerless, provide the imaginal and charged image of the wild woman living at the liminal space between village and wood. You must do what is dangerous, you must see and worship the divine in the mundane, you must be willing to allow magic to creep into the modern world through the temporal port of your own warm human, bloody body. It's all as scary as shit if you actually commit to doing it on a daily basis and not just when you feel like it.

Are you a witch? I am trying to be.

Labels: A Witch's Job Is To Turn The Wheel, She's a Witch, Wicca 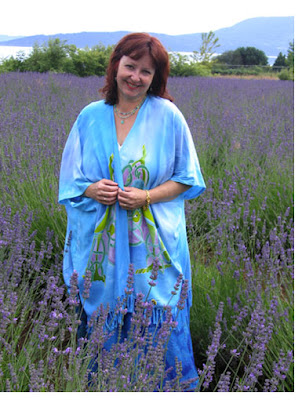 Joanna Colbert has completed her Gaian Tarot Deck, to be published in 2011. Her final card, available at the link, is a fitting conclusion and summation of the work.

Joanna's blogged the cards as she's created them, allowing us to watch the creative process unfold. My favorite is still the one with the women swimming in deep blue water, with an otter. (If Joanna ever decides to sell the paintings, that's the one I want!) But I've also done some deep meditations based on her picture of a young man lost in the woods and burrowed into a lean-to shelter and the card of bindweed (a particular bane in my front garden and an excellent metaphor).

Congratulations, Joanna! I don't buy many tarot decks, because otherwise I could too easily get out of control, but yours (and the Greenwood Tarot) are on my list for sure! 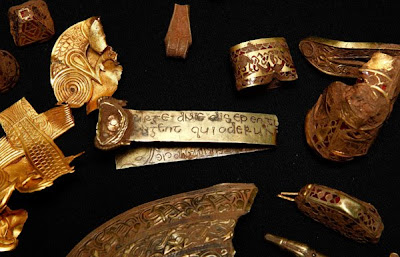 Here's an interesting story about what appears to be a significant discovery of Saxon war booty, much of it made from gold. There's some speculation about whether the person who buried the treasure was Pagan.

Mr Whykes believes the booty belonged to a [P]agan king.

"Some of the items, which might actually be slightly later, would certainly seem to be Christian," he said.

"We've certainly seen crosses, one of which seems to have been deliberately broken and the other seems to have been deliberately folded in on itself, so it may be as simple to say that this is a [P]agan king who's taking religious artefacts and stopping them being religious artefacts." Earlier, the article describes some of the items and notes that: "It's mostly sword fittings, which is quite incredible. There are also strips of gold decorated with garnets, which as yet we haven't been able to identify, strange little gold snakes," he said. Although the article doesn't discuss the possible religious significance of those "strange little gold snakes," I wonder if their presence doesn't also point to, if not the religion of the person who buried the items, at least to Pagan worship among those from whom the items were taken. The snake, of course, is an ancient symbol of the Goddess. Another article reports that: Perhaps the most intriguing question of all raised by the finds concerns religious belief. As well as the three crosses found in Staffordshire, there is a piece of gold bearing a Biblical inscription from the Book of Numbers. This would suggest that Christianity was widespread in seventh-century Britain.
However, the evidence at Sutton Hoo appears to point the other way. There, the remains of a huge ship – about 90 feet long – were discovered with an intact treasure chamber at its heart. Although some Christian symbols were discovered at Sutton Hoo, the burial itself was [P]agan. So what was going on?
"My own feeling is that this was a period of great intellectual liberty," says Carver. "There was no over-arching authority to tell you what to think. Some people were Christian, some people were [P]agan and you had a considerable amount of interplay between the two." At the least, scholars expect the find to cause new thinking about the period when Christianity was becoming more popular than Paganism.

Leslie Webster, a former British Museum curator and specialist in Anglo-Saxon culture, saw the treasure last week. "It will make historians, literary scholars, archaeologists and art historians," she says, "think again about rising (and failing) kingdoms, the transition from [P]aganism to Christianity, the conduct of battle and the nature of fine metalwork – to name only a few of the many huge issues it raises."

And, there's another interesting element to the story. The items were found by an amateur metal detectorist -- one of those guys who goes around with those beeping metal poles. On the day that he found the items, he invoked ancient spirits to help him find the gold:

Mr Herbert described the day he found the treasure, including a spooky [sic] detail before he set out for his day's detecting.

"I have this phrase that I say sometimes; 'spirits of yesteryear take me where the coins appear', but on that day I changed coins to gold," he said.

"I don't know why I said it that day, but I think somebody was listening and directed me to it... This is what metal detectorists dream of, finding stuff like this. But the vast amount there is is just unbelievable."

Hopefully, the items will end up in a museum and subject to study by archeologists and religious historians.

Photo found here
Posted by Hecate at 9:09 AM No comments: