Half Sick Of Shadows

Pissing Off The Witch: Never A Good Idea 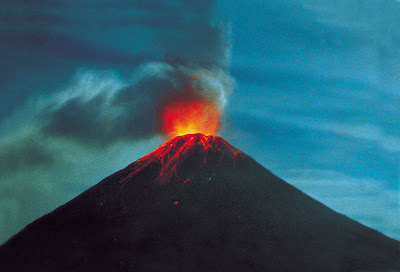 Ruh Roh. It's no surprise to me that this is all happening during a retrograde Mercury.

The worry for Icelanders is that each time Eyjafjoell has erupted over the last millennium, Katla, named after an Icelandic witch, quickly followed.

Explosive percussions heard every few minutes here testify to lava explosions inside Eyjafjoell, a few kilometers (miles) to the west, and the threat that Katla might be awaiting its cue. "There have been three Eyjafjoell eruptions and Katla has followed each time," said geophysicist Sigrun Hreinsdottir, [I love Scandanavian names] at the Earth Sciences Institute. "They are very close."

Some believe the volcanoes are directly linked underground so that magma from one can flow into the other. Hreinsdottir said that what happens inside volcanoes is largely a mystery. What's known is that Katla has erupted approximately every 80 years since Vikings first settled this island nestled under the Arctic Circle more than a thousand years ago. The last eruption was in 1918 and "it's the longest pause of Katla on record, which is why we are monitoring it very carefully," Hreinsdottir said.

An eruption from Katla might not necessarily be dangerous. But it has the potential every time to repeat the 1918 scene when a wall of melted glacier water swept down, bearing ice chunks the size of houses, and blanketing southern Iceland in thick ash. What effect a monster eruption would have on a Europe [already] crippled by the much milder Eyjafjoell can only be imagined. Much would depend on wind direction, the type of ash and height of the ash plume.

All the same, Katla -- known with the volcano Hekla as Iceland's "angry sisters" -- looms darkly in [local residents'] life. "We were brought up on this," Gudmunsson said. "In school we were told stories about Katla and we trained to evacuate." In case of a major eruption, a towering wave of melted glacier water could rush from the mountain across the narrow, flat coastal strip and, potentially, into Vik. "I live in a house on the flat, so when Katla goes and the eruption starts we have to move up the hill," Gudmunsson said. "The odds are not very high but it can happen and it has happened."

Better to just not piss off the witch!

In the Saga, Katla is a sorceress, a witch who at first with wit and smart magick hides her child from the men who want to kill it. But the magick isn't all perfect: the men always return after having had to give up the search in Katla's place at Holt. Each time they return, they will look exactly in the very spot the child was hidden before.

Katla expects that to happen and hides her child in a different place and in a different manner every time and she knows to work a different magick too. Thrice her strivings succeed, but the fourth time the men learned to expect magical illusions and brought with them another witch for help. This time, Katla didn't see them coming soon enough to prepare another new perfect hideaway for her child, the magick doesn't work this time. The men find and kill her child.

In her grief and anger Katla curses the men, they should stay in bad luck from now on. After that, the men kill Katla too.

The case is brought to the Thorsnes-Thing. All who parttook in the murders are taken away their property, and banned from the country for the rest of their lives. The buy a ship and sail away from Iceland, and there is no trace left of them after that. 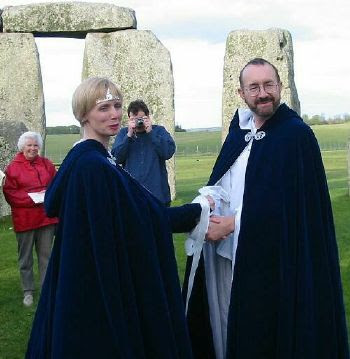 Pagans have a multiplicity of opinions on almost any subject, but if there's one thing we probably all agree upon, it's sex. Sex, in Pagan "thealogy", is a Good Thing, a gift of the Goddess, a way we connect deeply and intimately with one another and with the great creative forces of life. Sexuality is sacred. "All acts of love and pleasure are my rituals," says the Charge of the Goddess, one of our most beloved liturgies.

Our religious view of sexuality is an alternative to both sexual suppression and sexual exploitation. The prevailing culture sees sex either as an evil to be controlled or as a selling agent and profitable commodity. Neither view makes for healthy relationships or sacred connection.

We teach our young people to practice sexual responsibility--to be kind and respectful to one's partners, to protect themselves and their partners from disease and from unwanted pregnancies, to listen if someone says 'no' and to respect each person's boundaries and choices.

The whole thing is well worth a read.

Picture found here here.
Posted by Hecate at 11:55 AM No comments:

Labels: All Acts Of Love And Pleasure, Pagans, Sex

All acts of love and pleasure are rituals of the Goddess.

Forty years ago, I did not know that I would live each day a priestess to Mother Earth. But I would not have turned away from that future. Indeed, I would have set out running, stumbling, in awe of the notion that I might get here.

May it be so for you.


Perhaps he would never have dared to raise his eyes, but that, though the piping was now hushed, the call and the summons seemed still dominant and imperious. He might not refuse, were Death himself waiting to strike him instantly, once he had looked with mortal eye on things rightly kept hidden. Trembling he obeyed, and raised his humble head; and then, in that utter clearness of the imminent dawn, while Nature, flushed with fulness of incredible colour, seemed to hold her breath for the event, he looked in the very eyes of the Friend and Helper; saw the backward sweep of the curved horns, gleaming in the growing daylight; saw the stern, hooked nose between the kindly eyes that were looking down on them humourously, while the bearded mouth broke into a half-smile at the corners; saw the rippling muscles on the arm that lay across the broad chest, the long supple hand still holding the pan-pipes only just fallen away from the parted lips; saw the splendid curves of the shaggy limbs disposed in majestic ease on the sward; saw, last of all, nestling between his very hooves, sleeping soundly in entire peace and contentment, the little, round, podgy, childish form of the baby otter. All this he saw, for one moment breathless and intense, vivid on the morning sky; and still, as he looked, he lived; and still, as he lived, he wondered.

'Rat!' he found breath to whisper, shaking. 'Are you afraid?'

'Afraid?' murmured the Rat, his eyes shining with unutterable love. 'Afraid! Of Him? O, never, never! And yet— and yet— O, Mole, I am afraid!'

Then the two animals, crouching to the earth, bowed their heads and did worship.

Sudden and magnificent, the sun's broad golden disc showed itself over the horizon facing them; and the first rays, shooting across the level water-meadows, took the animals full in the eyes and dazzled them. When they were able to look once more, the Vision had vanished, and the air was full of the carol of birds that hailed the dawn.

As they stared blankly. in dumb misery deepening as they slowly realised all they had seen and all they had lost, a capricious little breeze, dancing up from the surface of the water, tossed the aspens, shook the dewy roses and blew lightly and caressingly in their faces; and with its soft touch came instant oblivion. For this is the last best gift that the kindly demi- god is careful to bestow on those to whom he has revealed himself in their helping: the gift of forgetfulness. Lest the awful remembrance should remain and grow, and overshadow mirth and pleasure, and the great haunting memory should spoil all the after-lives of little animals helped out of difficulties, in order that they should be happy and lighthearted as before.
Posted by Hecate at 9:37 PM 1 comment:

Sounds worth checking out. 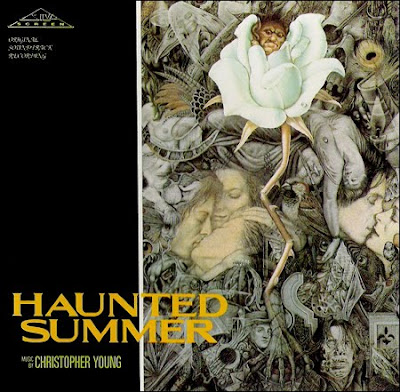 1. What are your aims in Eternal Haunted Summer?
My aim with Eternal Haunted Summer is four-fold. 1) To provide a venue for authors to publish original Pagan-themed poetry and short fiction. 2) To provide a venue in which authors can have their Pagan-themed works reviewed. 3) To expose as wide an audience as possible to the talent and diversity of Pagan authors. And 4) To connect with other Pagan publishing ventures by posting calls for submissions, contests, et cetera and so on.

2. What do you do that other people don’t?
Eternal Haunted Summer is unique in that it is explicitly a Pagan site. There are several ezines and magazines out there that specialize in fantasy- or occult- or science fiction-themed works (Goblin Fruit and Mythic Delirium being two of my favorites). And Scarlet Imprint has released several limited run collectable editions, such as the brand new Datura: An Anthology of Esoteric Poesis. But there is no one else publishing poems and short fiction about the Gods and Goddesses and Heroes of old from a Pagan perspective.
Plus, I pay


The ezine is here.

Picture found here.
Posted by Hecate at 5:46 PM No comments:

You Had Me At Denzel

Dorothy Height, a leader of the African-American and women’s rights movements who was considered both the grande dame of the civil rights era and its unsung heroine, died on Tuesday in Washington. She was 98.

What is remembered does not die.
Posted by Hecate at 8:09 PM No comments:

Labels: May The Goddess Guard Her

Demonizing witches. Gee, what a creative concept.
Posted by Hecate at 6:45 PM 2 comments: 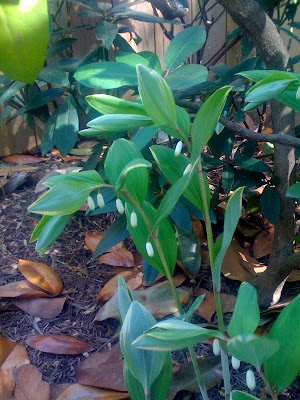 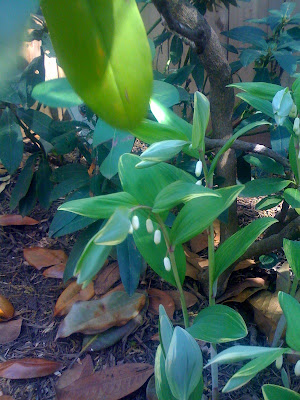 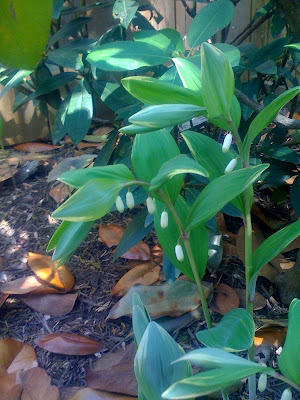 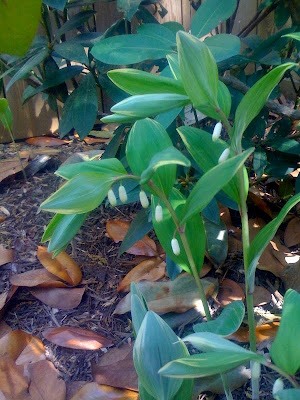 The people who lived here before me planted Solomon's Seal in the woodland garden and it's been slowly and gracefully spreading, ever since. It tolerates the shade and blooms now, when the daffs and crocus are done and most of the other Spring flowers are still to come. The legend says that King Solomon had a ring, with a star formed of an upwards-pointing triangle (for fire) and a downwards pointing triangle (for water) and that it allowed him to command genies. No idea why the plant has the same name. It's had various medicinal applications throughout the years and reportedly can be eaten, like asparagus, for its starch, but I just like to grow it for its pretty leaves and white flowers.

What's spreading in your living space?

Photos by the author. If you copy, please link back.
Posted by Hecate at 4:40 PM 8 comments:

Transition Town: I'd Expect To Find It Where Three Crossroads Meet