If It's Monday, I Must Be In DC 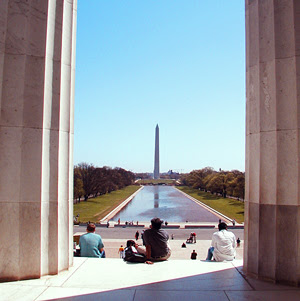 Many, many thanks to my brilliant friend, E, for filling in for me. We had a wonderful weekend in the mountains, cold weather notwithstanding. If you haven't had a chance to read E's posts, check them out. From net neutrality, to DC voting rights, to New Orleans, to some very hot poetry, she covered a lot of interesting topics. (Thanks, too, to my very creative friend K. who took care of Miss Thing and my plants!)

Meanwhile, happy second blogversary to The Gods Are Bored -- it's on my daily must-read list.

Also, while he's more sanguine about the Chrisitianists' ultimate goal (coughitissotheocracycough) Jason at the Wild Hunt does the best job that I've seen so far of explaining their current strategy and goals:

[W]hile conservative Christians would love to see a "real" Christian in office, it isn't nearly as important as planning for the future.

Youth movements like the militaristic BattleCry, the baby-machine politics of the "quiverfulls", and the slow take-over of military academies by evangelicals point to a movement that knows it hasn't reached its goal (yet), but hopes that the next generation just might. In the meantime, conservative Christian groups try to push laws on the state and federal level that will privilege the Christian majority without the violating constitutional rights outright. The ultimate goal isn't supreme political power, but massive cultural power that will ensure that any who do rise in politics can't ignore conservative Christian demands.

This is already taking shape. Not a single presidential candidate, no matter how liberal, dares to offend evangelicals (if they want to win). A Muslim congressman swearing in on the Koran instead of the Bible makes national news, and teaching the Bible in school is no longer seen as a fringe issue. What we are seeing isn't necessarily the coming of a theocracy (though I suppose all things are possible), but the makings of an entrenched Christian population that has a powerful influence over our daily lives. No need to get rid of our Constitution, after all, we are a Christian Nation don't you know?


What he has to say is especially scary when you consider that the Bush junta has stuffed the government at every level with Christianists.
Posted by Hecate at 8:24 AM

I hope you don't mind an off-topic comment, but I think this is important: There is a great post on The Carpetbagger Report from a few days ago about the mainstream media's (specifically Time magazine's) ignoring the prosecutor purge scandal.


What explains the failure of the mainstream media to cover the purge scandal for so long, and so many other scandals? Do you think somebody just set up newspaper editors to cheat on their wives, and threatened to tell if the editors wouldn’t play ball when they come back some day and ask for something?

It wouldn’t be that hard to do, when you think about it. People wouldn’t talk about it.

I am frankly terrified of the direction the country is going. On one hand, I see America's corporate masters on a course to privatize Armies (and happily getting the US Government to pay for training since they recruit FROM the US Army); and now the Religious Reich is going to train their own? My, doesn't that look like a future out of scary science fiction for all the reasonable and rational liberals and pagans? This might be why folks like vodka in their morning tea!

But seriously, I don't like using the word "theocracy" (even if it is accurate) because it creates a set of expectations in people about how this is going to come about. It leads us to focus on the utter whack-jobs spouting off about armed revolution. When instead that dominance is going to look a whole lot more like the "Purpose Driven Life".