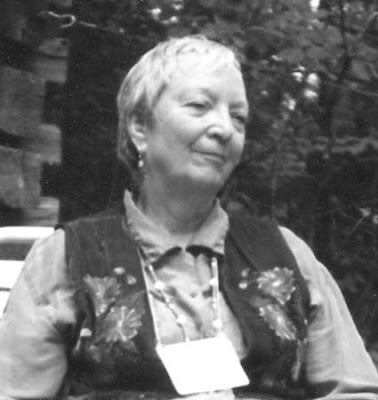 She paid the Earth the inestimable compliment of being reluctant to leave. Madeline L'Engle has died. I loved her work beyond almost anyone else's on Earth. Her writing on writing has been hugely important to my own, paltry, development as an aspiring writer. The characters that she created helped me to grow up, got me to agree to grow up, showed me that it wouldn't be futile to grow up, helped me to become a grown woman, a middle-aged woman, the mother of a son, a grandmother. I can't believe that she's gone.

It's fair to say that I truly loved her.

It's funny, because L'Engle was a quintissential Christian writer, a woman who waxed so poetic about the Episcopalian Book of Common Prayer that she made me buy a copy and read it. And, yet, I'd dub her "witch but doesn't know it" in a heartbeat. She wrote about angels in a way that made it clear to me that she had direct experience with forces larger than human. She clearly understood, in an almost Charles Williams kind of way, that there is nothing mundane about the mundane world and that Earth is crammed, crammed to the brink, with Heaven. And, vice versa.

As the NYT noted: “Wrinkle” is one of the most banned books because of its treatment of the deity. . . . The book used concepts that Ms. L’Engle said she had plucked from Einstein’s theory of relativity and Planck’s quantum theory, almost flaunting her frequent assertion that children’s literature is literature too difficult for adults to understand. She also characterized the book as her refutation of ideas of German theologians. . . . “Why does anybody tell a story?” Ms. L’Engle once asked, even though she knew the answer.

“It does indeed have something to do with faith,” she said, “faith that the universe has meaning, that our little human lives are not irrelevant, that what we choose or say or do matters, matters cosmically.”

Thank you, Madeline L'Engle. Goddess-speed.
Posted by Hecate at 2:27 PM

Labels: Art, Sit Down At A Typewriter And Open A Vein

I read Wrinkle when I was about 11, one of my favorite books ever.

thank you. I loved her too.