May They Receive Exactly What They Deserve; May They Meet Their Namesake Every Minute, Forever 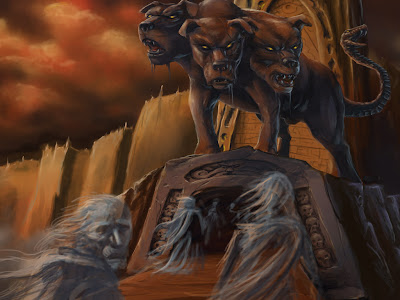 The free market at work, ladies and gentlemen.

Cerberus Capital, one of Wall Street’s most notoriously ruthless leveraged-buyout firms (or “private equity firms” in PC-speak), recently made a $1.8 billion killing on their human plasma investment, a company called Talecris, which they bought for a mere $82.5 million just four years earlier. Meaning Cerberus made 23 times their investment on human plasma. They did it by the most savage, heartless means possible: by paying peanuts to their impoverished human plasma donors, who increasingly come from Mexican border towns to blood-pumping stations set up on the American side, jacking up the price of plasma by restricting supply (a lawsuit filed by the Federal Trade Commission accused Cerberus Plasma Holdings of “operat[ing] as an oligopoly”), and then selling the refined products to the most desperately ill, patients suffering from hemophilia, severe burns, multiple sclerosis, and autoimmune deficiencies. The products cost so much—one, IVIG (intravenous immunoglobulin) cost twice the price of gold as of last summer -- that American health insurance companies have been dropping or denying their policy holders in increasing numbers, endangering untold numbers.

I just can't think of anything to say.

I cant think of anything to say either except thanks for the information. I am surprised BO did not grant them a trillion dollars.

May they finally realize the damnation they are facing and if not, then may the harm they do come back to them threefold.

Cerberus also played a major role in the Chrysler debacle and made out richly on it. And one of our former esteemed (not) public servants, VP Dan Quayle, is one of the beneficiaries as he is a Cerberus partner.

The names and salaries people at the top of this organization need to be made public. And their actions.

Buried deep in the article, on the second page:

". . .the United States is one of just a handful of nations around the world where companies can legally pay humans for their blood and then sell it for a profit."

So, why is this permitted? It can't be because people won't donate blood unless they're paid. Other countries manage just fine with a completely voluntary donor system. Perhaps some remedial legislation is in order?

"I just can't think of anything to say."

Me either. But I think I am going to be sick.

You know, the blood banks also make big bucks selling blood -- everyone feels so noble donating blood but that blood is not given away -- it is sold at a big profit to the hospitals who also jack up the price. We live with unregulated corporations who will exploit us for their own profit at every opportunity. And now they own the president, the politicians in both parties, the media, the unions and the boards/staff at what used to be our organizations.