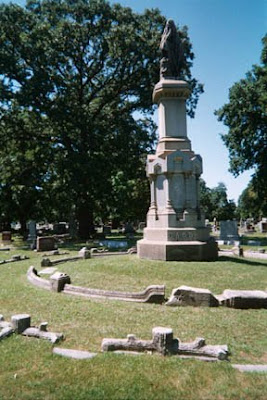 I admit that I love cemeteries, not only for the interesting "feel" of most of them, but also for the art and the history. Here's an interesting article by the caretaker of Tulocay Cemetery in Napa Valley, California. (Who gets to live on the grounds. Sounds like fun!)

OK, now about those Druids. The United Ancient Order of Druids peaked at about 30,000 members in the 1920s. Northern California, especially Marin County, was a hotbed of Druid activity.

At one time, Napa had two “Groves,” the name for local chapters. Seems the ancient Druid priests met in groves of large trees. Which brings up an important point; many of these groups had what I call a “mythic” history that was very distinct from their empirically based history. A groups’ “mythic” history was the source of their values, practices, rituals, etc. The U.A.O.D. did not directly descend from the Druids. They simply drew their culture from this group-myth of ancient Celtic priests.
Many societies conveniently conflated their “mythic” and empirically history and would have the outsider believe they’re the same. They’re not. There’s still an active Druid “grove” in Novato. Tulocay has it’s own designated Druid section, the William Tell Grove, No. 77. Tulocay is home to 10-12 definitively marked Druid graves.

He might be surprised how many Druids there really are in Northern California these days.

Of course, some Pagans want their remains to rest (often as ashes) in a garden, a grove, the Sea. And some may choose an explicitly Pagan cemetery. We've seen Wiccan headstones at Arlington and there are movements to allow headstones for a number of other Pagan denominations at Arlington, as well. But it's fascinating to consider that there's a long history of allowing Pagan-themed headstones in private cemeteries. One wonders what the reaction would be today to a family wanting to place a headstone with a pentacle and the three-headed Goddess Hecate, for example, upon their loved one's grave.

I adore cemeteries too! (and happen to live on Lot 13 on Cemetery Hill) Yes -- it would be fascinating to see what markers/stones etc. would be available in the marketplace or perhaps by artisan for our graves! Hmmm ... I wonder if there would be a market within the "highly competitive" funeral/cemetery trade? (the quote is from the 1959 movie "A Christmas Carol" when old Marley dies and the wonderfully eerie funeral director/mortician sits outside the bedroom door!) I do realize that the trend is toward "green" burials ... wonder if there would be ceremonies available for cremations etec.

Myths! Myths! Everywhere myths! How about the myth of the dude who died and got up again and ascended bodily into heaven? Why isn't that considered a myth?

We at "The Gods Are Bored" applaud this cemetery and predict that the 21st century will see more cemeteries just like it.