How Do You Get to Carnegie Hall? 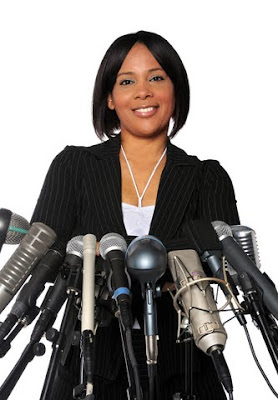 Here's a fascinating article about Media Matters for America doing some intense training in how to handle the media. Their particular focus is how to handle being on tv talk shows, but much of the advice is relevant for dealing with all forms of media. One of the weaknesses that MMFA identifies for lots of liberals is shared by many Witches and other Pagans:

The problem for the soldiers of the left, according to Media Matters instructors, is that they are just too smart for their own good. The traditional dependence on facts and figures, on being right, is no longer germane. Too often these wonks disappear into the policy weeds or fall through the cracks of nuance.

This is where, as I've discussed before, knowing your objectives for the interview and having your simple, short, well-thought-out statement makes a lot of difference. You can always add details and more information if asked. And a pithy, planned close is good, as well:

Shuster asked how Brenner could advocate foreign aid during a budget crisis.

“Well, David,” he replied evenly, “I understand everyone is hurting” and went on to calmly explain that foreign aid pays for medicines for children and early warning systems for tsunamis. In a second round, Shuster hammed it up as an aggressive Fox host and asked Brenner, “Why do you love the children of Africa more than the children of Alabama?”

“I want it to say ‘Made in America’ on medicines rather than bombs,” Brenner replied coolly.

“Ooooh,” the participants in the control room hummed approvingly. “Did he have that in the can?” one asked.

I get that, with a few exceptions, most Witches and other Pagans aren't going to spend time on national news shows, nor will they have access to the level of training described in the WaPo article. But everyone who talks to the media can spend some time practicing, and even a few sessions with a friend, videoed on an iPhone, can make a big difference.

Here's a great example of a Pagan doing it right. Note that Reverend McCollum had three clear, positive goals (none of which were "and I want people to know that we don't worship Satan or eat babies").

I had set out with three main goals to accomplish for our community which was the real focus of my trip. My first goal was to have us seen by others as a community with valuable things to contribute to the world. My second goal was to make alliances with other world spiritualities to join together to become a more formidable force for positive change in the world. And my third goal, was to include Pagan ideals into the mix as world leaders strive to construct a plan to achieve world peace and a sustainable planet.

And, as an exercise, see if you can re-write this closing sentence in an otherwise outstanding media presentation concerning recent (and wildly successful) Pagan efforts to raise money for relief efforts in Japan: "And we are getting rid of the myth that Pagans cannot act together." (Remember Lakoff's point: When you attempt to negate a frame, you invoke it.)

Rewritten final clause of the last sentence: "...and we've shown once again that Pagans can act together and with others to help make this a better world."

fyreflye: Excellent rewrite! And perhaps add the classic "ball of energy" gesture -- hands apart and then drawing them tightly together. This is a visual punctuation point at the end of a statement.