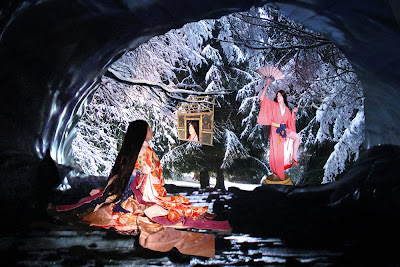 The shining sun Goddess Amaterasu had a brother, Susanoo, lord of storms and of the sea.

Susanoo was an uncontrollable man, often given to violence. When he quarreled with his sister, Susanoo lifted up Amaterasu's beloved pony and threw it at Amaterasu and her priestesses.

Amaterasu was so angry that she hid in the cave called Iwayado, and there was no warmth or light upon the Earth.

The other Kami, or Goddesses and Gods, tried to lure Amaterasu out of her cave, but her anger still burned, and she refused to come out. Ame-no-Uzume, the Kami of joy, knew what to do. She placed a mirror near the entrance of the cave. Then, she did a bawdy dance, which made all of the other Kami roar with laughter. Amaterasu was still angry at her brother, the Kami of the stormy sea, but she wanted to know what made everyone laugh. She crept to the edge of the cave and peeked out at Ame-no-Uzume and, angry as she was, Amaterasu had to laugh. In that moment, a ray of her sunlight escaped from the dark cave and reflected in the mirror. Amaterasu saw her own lovely face and could no longer remain angry. She returned to the world, bringing sunlight and warmth.

Today, in Japan, Susanoo's violence was great and the uncontrollable sea stormed over Amaterasu's land. It must seem to the people of Japan as if the lovely sun Kami has again withdrawn from them. My own heart is heavy with sadness at the loss of lives, homes, family altars, and pets and with fear for the damage done to Japan's nuclear plants. I'm going to go to my altar, light a candle to reflect in my scrying mirror, and dance like Ame-no-Uzume, in the hopes that the people of Japan will soon bask under Amaterasu's warm light, rather than Susanoo's angry seas.