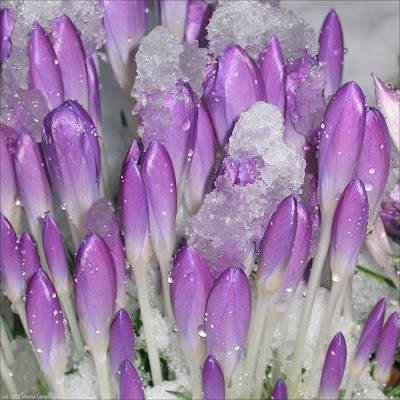 Here's a great post by artist Sally J. Smith that shows what it's like to pay deep attention to your landbase. In a recent interview, Smith described how her art reached a turning point when she realized that she wanted to be out in nature, co-creating art with it, rather than inside a studio, making pictures of it. You can see in her post how this requires her to enter into relationship with her landbase, rather than simply live on it.

I don't know what it has been like where you live, but here it seemed winter would last forever. It was just last week that I was bundled up and huddled along the ice-bound shores of the lake waiting for the sun to rise. I still had the chance to make ice sculptures it was so cold here. The snow was deep in the woods, but it was crystallized and granular. The delicate flakes long gone, but now a coarse sugary texture. Difficult to make sculptures with as it does not stick together well. So this time of year is tricky in terms of making sculptures. But the sun is so strong now that the snows do melt, even if the temperatures can only rise to the low 40s which was all that could be managed last week. But the emerald green mosses are emerging and letting me know that soon, very soon it will be time to play with this exquisite green once more.

The combination of melting snow and icy nights makes for some fascinating sculptures to be found however! One day, while walking in a nearby field, I found these delicate polka dot creations creating an exquisite lace effect at the edge of the snow. The day was grey and the wind was cold, but the day before had been sunny. Just warm enough to create the droplets on the underside of the paper thin ice... which re-froze in the chill and still night air.

You should read the whole post for great discussions of her close connection to some local birds and the control that nature exercises over her work.

Thalia said...
This comment has been removed by the author.
12:23 AM

Let's try that again, this time with some actual html so the margins don't get blown.

I wrote a post in response to this one, about cleaning up my poor yard, and my relationship to this little bit of land. It's here.