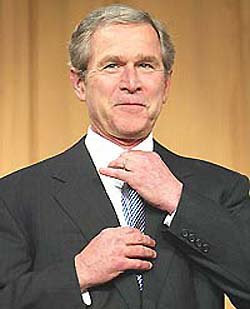 "'You don't get it.' " He said a senior official told him that "this will be a political document, or it will not be released."

I've blogged before about the Bush junta's efforts to turn the office of the Surgeon General into yet another tentacle of the Republican National Committee. Today's WaPo provides more details concerning the junta's willingness to put health behind politicls.

A surgeon general's report in 2006 that called on Americans to help tackle global health problems has been kept from the public by a Bush political appointee without any background or expertise in medicine or public health, chiefly because the report did not promote the administration's policy accomplishments, according to current and former public health officials.

The report described the link between poverty and poor health, urged the U.S. government to help combat widespread diseases as a key aim of its foreign policy, and called on corporations to help improve health conditions in the countries where they operate. A copy of the report was obtained by The Washington Post.
. . .

The draft report itself, in language linking public health problems with violence and other social ills, says "we cannot overstate . . . that problems in remote parts of the globe can no longer be ignored. Diseases that Americans once read about as affecting people in regions . . . most of us would never visit are now capable of reaching us directly. The hunger, disease, and death resulting from poor food and nutrition create social and political instability . . . and that instability may spread to other nations as people migrate to survive."

In 65 pages, the report charts trends in infectious and chronic disease; reviews efforts to curb AIDS, tuberculosis and malaria; calls for the careful monitoring of public health to safeguard against bioterrorism; and explains the importance of proper nutrition, childhood immunizations and clean air and water, among other topics. Its underlying message is that disease and suffering do not respect political boundaries in an era of globalization and mass population movements.

Honestly, this ought to enrage every single American, regardless of party affiliation. The Mayberry Machiavelli junta completely fails to understand the difference between the government -- which belongs to the American people -- and the Republican Party. The Republican Senators who stand as a bulwark protecting these criminals from impeachment were so upset over Clinton's "politicization" of the White House travel office -- an office far less important to the health and welfare of America's citizens than the office of the Surgeon General -- that they demanded an investigation and held serious hearings. This is a call to them: you must have a little bit of conscience left inside your party-owned hearts. Stand up for America, for a change.

Impeach Bush and Cheney.
Posted by Hecate at 7:46 AM

Like the SS, Karl Rove's major strategy was to have a politcal appointee in every government arm, right down to the low lifes who decorate the White House Christmas tree, to handle what the public reads and what it doesn't. If it doesn't push the Administration it's history. I believe in this extrodinary debacle it was Steiger, who's parents were friendly with Bush and Rumsfeld, who gave some lame excuse to stop publication. Reason: Lack of focus. Junta is right on.

Don't get me started on the latest Repub squash on national health care for kids.