On The Dangers Of Posting Poetry 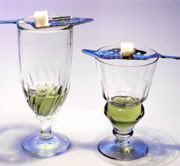 There will be anger
Followed by the deluge.
We know we will be among the drowned.
But we will take the devil with us down
To the deepest of deeps:
Our end will be his...
But slowly... What will be said
Of us when they look back on it all?
What will be said
Of us after the deluge,
After the coming drowning, after the coming anger,
What will be said of us poets and writers?
Were we men in truth,
Half-men
Or mere shadows?
Fear,
Fear of the sword,
Made of us something unspeakable --
Except in the vulgar tongue.
[...]
What will be said?
Will it be said we chose silence
For fear of death?
The letter has an edge like a sword,
Can turn against its speaker.
[...]
What will be said?
Will it be said that we chose to speak in symbols,
Whispers, silent gestures,
In all the arts of coded speech?
We said it all -- in vino veritas,
But people
Had other concerns:
Their daily bread,
A kilo of meat.
[...]
Maqrizi,
You who always come after the deluge:
A plague is a plague --
It always comes on the tail of a famine.
It snatched your daughter, and many other daughters
As the wolf was standing guard.
[...]
I hereby solemnly swear, Maqrizi,
Not to leave this world
Without scandal.
I ask no one for justice:
True justice is not to be begged.
Our judges are high priests,
Our high priests are distant
And all are traitors.
Let someone else write poetry,
I am writing the Chronicles of Maqrizi.
[...]
I drink, day
And night I drink.
Sinking... I sink into my depths.
There I see him,
In my heart a holy pearl,
Unbreakable,
Even if a giant mountain falls upon it.
When I sober up, I float to the surface, lose my pearl.
Was it lost? No. It was me who was lost--
When I sobered up I floated to the surface.
For sure the pearl is down there in the depths...
No.
It is between two thighs, trampled under feet
Shod in military or civilian boots,
Under the wheels of petro-dollar cars.
[...].
Usually I drink from two glasses...
My comrade in the madhouse died.
He used to share my drink
And share my grief.
We had no time for joy:
He used to share my past anger,
And present anger -- and that to come.
Usually I drink from two glasses,
The second to toast him.
But tonight I drink from one glass:
It seems my friend, upon his death,
Had given up drinking;
Or maybe it was me who gave up.
Then let me drink to giving up drinking
Until the last of all the Noahs' arks has left
With all those who will be saved from the coming deluge.
.................
I sink and sink
And see in my glass
Monkey fornicating with rat
Or rat fornicating with wolf
Or wolf with owl.
................
Maqrizi's daughter is lost
In the plague
And the plague always comes on the tail of a famine,
When prices are measured against a kilo of meat,
Even the price of writers, novelists, poets,
Artists and scientists,
When the stuff of the dreams of the poor is meat;
And fuul beans,
Fruit for the masters.
[...]
I recall a poet's saying:
I shall sleep not to see
My country being bought and sold.
[...]
Then drink from two glasses,
Or, if you wish, drink from one.
If my death cannot be driven away,
Then let me engage with it
With what I have at hand.